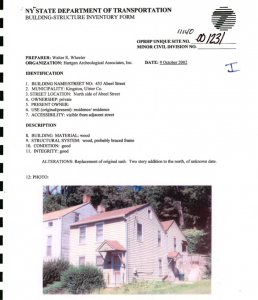 Today, Ward 3 Alderman Brad Will issued a communication to the Common Council regarding his concern of the potential demolition of what are  potentially significant historic properties in Kingston. The public is invited to attend the next Common Council meeting on Tuesday, May 5th to voice in on the following information. To view KingstonCitizens.org’s Facebook invite on the upcoming meeting, please visit our FACEBOOK page.

Having reached out to residents who are experts in the field of historic preservation, please note the following:

Attached find two reports prepared by an ACRA-Accredited archaeologist for the NYS DOT in 2002, and two current real estate market estimates.  There is some discrepancy of physical address between tax roll, Ulster GIS, and the reports, but none regarding the historical significance of both properties – constructed ca. 1810-1830.  Note on page two of each report that the subject property “meets eligibility criteria” for inclusion on both State and National Historic Registers, and that each “embodies the distinct characteristics of a type, period, or method of construction; or represents a significant and distinguishable entity whose components may lack individual distinction.”

These two structures should be saved – along with others that we will be asked to appropriate funds for destruction.  They are two hundred year old structuresthat speak to Kingston’s history – they should and can be preserved.  Properties should be re-marketed to eligible buyers (individuals or organizations) for reasonable asking prices that facilitate and encourage their preservation.  Clear and attractive identifying signage should be placed at the properties that state they are City-owned and for sale.  Absent these steps, Kingston risks losing much credibility of the marketing message stating that “Historic Is Just Our Beginning.”

Equally important will be the City developing comprehensive and public-accessible criteria to evaluate not only the structural integrity – but also the historic value and status – of any property that is being considered for demolition.  This means the City has to do its homework with SHPO, DOT, the County, Heritage Area Commission, Friends of Historic Kingston, and any other entity that may offer valuable information regarding a given property’s status.

Brad Will
Alderman, City of Kingston 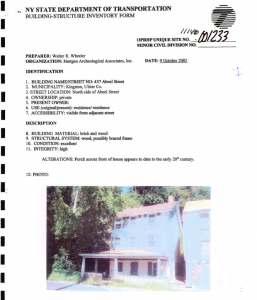 FROM THE CITY OF KINGSTON TOURISM WEB PAGE:

“The City of Kingston is nestled in the heart of Ulster County, New York. It is 91 miles north of New York City and 59 miles south of Albany. Kingston was New York’s first capital in 1777, and was burned by the British on October 16, 1777, after the Battles of Saratoga. In the 19th century, the city became an important transport hub after the discovery of natural cement in the region, and had both railroad and canal connections. Passenger rail service has since ceased, and many of the older buildings are part of three historic districts, such as the Uptown Stockade District, the Midtown Neighborhood Broadway Corridor, and the Downtown Rondout-West Strand Historic District.” 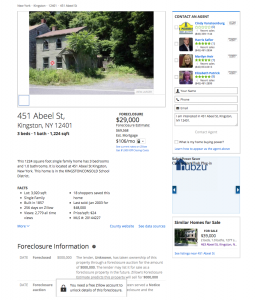 “Here in Kingston we say, “Historic is just our beginning,” but when it comes to historic preservation, we aren’t just getting started. We know that when people are looking to move to a city like Kingston, back to a place where population has declined over the years as factories closed or the shift took place toward the suburbs, they look for historic areas first.

“We have historic districts in Uptown where the original Stockade was established — along West Chestnut Street with grand views of the Rondout and the Hudson — and in the Rondout near the waterfront. But now we are taking steps and taking stock in our historic assets so we can plan for the future and expose our past.” – Gregg Swanzey, Director of Economic Development & Strategic Partnerships, City of Kingston 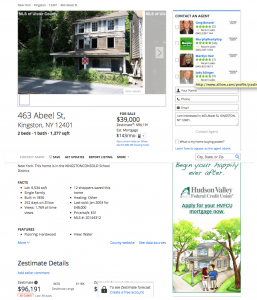