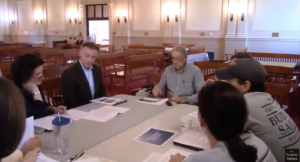 On Thursday, September 28th at 6:00pm at City Hall, the first in a series of forums regarding the ongoing effort to update the City of Kingston’s zoning took place.

The theme for this month’s public forum was “Consolidation and Reformatting of Residential Districts and Bulk Standards.” A presentation on the topic took place to discuss the current code, why this topic is important and what has been discussed by the Zoning Sub-Committee so far regarding potential changes. Participants broke into smaller groups each facilitated by a city employee, where citizens in attendance provided comments and asked questions.

After watching the video, you can submit your questions or comments by sending an EMAIL to the City of Kingston’s planning office.  We recommend that you copy the Mayor of Kingston at SNoble@kingston-ny.gov and send yourself a copy for your records, too. 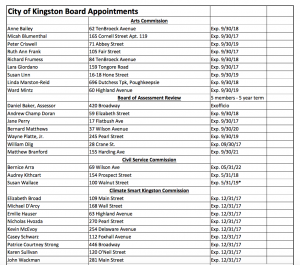 We know that primary elections can be confusing, and that’s why we created a guide intended to help City of Kingston residents successfully vote for their candidate tomorrow.  Please be in touch if you notice any errors or to make suggestions in the comment section.

The best of luck to all candidates.  Get out and vote Kingston citizens!

What does “Opportunity to Ballot” mean? (OTB)
An “Opportunity to Ballot” (or write-in) means voters affiliated with the party that is on the ballot are free to write any individual’s name in. For instance, if you are a Republican and you have the option to write-in a candidate in your ward or district, you may do so instead of voting for the listed candidate.  An opportunity to ballot is the result of petitioning within an election district and if valid petitions are submitted with enough signatures, this opens the ballot for a write-in.

CONSERVATIVE
The Ulster County Conservative party can be found on FACEBOOK.

INDEPENDENCE
Not to be confused with the “Independent” party, the Ulster County Independence party can be found on FACEBOOK for more information.

Recently we learned of an inquiry made by the City of Kingston Republican Committee Chair and general practice attorney, Joesph Ingarra. Apparently, he took it upon himself to write to the state Attorney General’s (AG) office, requesting that they investigate KingstonCitizens.org as a Political Action Committee (PAC).  He placed his request into a press release sent to several local news outlets to “investigate and report”.

Mr. Ingarra neglected to take the opportunity to reach out to us to clarify his concerns prior to his request to the AG. As a member of the legal profession, one would expect that he would understand the difference between a grass roots group and a PAC.

Here’s what is true.