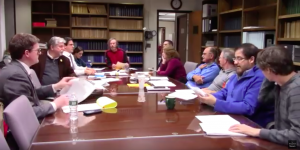 Last evening, the Ulster County Legislature Laws and Rules Committee had their monthly meeting with one of the items being to discuss Resolution No. 91  “Amending The Rules Of Order To Prohibit Memorializing Resolutions”.  It passed through committee by a 4 / 3 vote.  We filmed the meeting thanks to The Kingston News (brought to you by KingstonCitizens.org) so that you can see the debate from last night. We also took the liberty to note the legislator’s districts and localities they represent in the case that one of the members represents you and you wish to contact them directly.

Due to today’s snowstorm, the regular legislative session that was to be for this evening was moved to tomorrow night, Wednesday, March 15th at 7:00pm in Legislative Chambers (6th Floor) of the Ulster County Building located at 244 Fair Street in Kingston.  Residents can sign-up to speak when they arrive.

In the case that the meeting is moved again, we’ll send out an update.

2:00 – 2:40
Legislator Hector Rodriguez
District No. 20  (Town of New Paltz, Village of New Paltz)
Democrat, Working Families
“These changes are a vague attempt at putting lipstick on a pig…we’ll be duking this out on the floor every step of the way.”

4:00 – 4:19
Legislator David Donaldson
District No. 6  (City of Kingston)
Democrat, Working Families
“I agree with hector on it. It is lipstick on a pig. I will this.”

NOTE from KC.org:  Letters at times are effective and useful, but they do not require public debate or stands taken by an elected body. They also should not ever take the place of a memorializing resolution process.

8:10 – 10:55
Legislator Hector Rodriguez
“In my 14 years on the legislature, memorializing resolutions has never prevented any of us from doing our job. They give a sense of the body, and even spoken to in Robert’s Rules of Order – that’s how deep it goes. Memorializing resolutions have an impact. Our actions have helped the NYS Legislature create laws, as they often start on a local level. They are not clogging up the legislature as suggested.”

10:56 – 11:27
Legislator’s Ken Ronk
“I’ll vote no on this tonight if you can show me how a letter signed by twenty-three legislators doesn’t do all of the things you just said, I’ll vote no tonight.”
VIEW  Legislator Ronk’s challenge.

11:28 – 11:45
Legislator Hector Rodriguez
“Because as a legislator, we put forward a resolution. It is more powerful than a letter. We have to vote on it, placing it on the public record of the legislature.”

12:01 – 15:20
Legislator David Donaldson
“They may cut into our time, but I wouldn’t do away from them.  People want to hear where we stand at times on issues that are important to them. That’s what they want and that’s what I must represent.”

15:22 – 17:23
Legislator Ken Ronk
“If it were up to me, I would stay as long as necessary to get my work done on the legislature. In the last year, I have seen a few members of the Democratic caucus offer overtly political memorializing resolutions which serve to only polarize legislators to one side or the other on issues we have no control over.  I have long been a supporter of memorializing resolutions. I have been against this resolution until came up again no.  It’s gotten out of hand being used as a political tool.”

NOTE:  Ronk admits that he is in favor of a ban on memorializing resolutions due to a handful of Democratic members “using them as a political tool” in his opinion.  The public’s concern of such a ban limiting the speech of their elected officials and their own is never addressed.

18:09- 19:52
Legislator Richard Parete
“I truly hope this resolution passes. My father said it perfectly the other day. Memorializing resolutions are somewhat lazy. Legislators only bicker and fight debating them. We should go out and speak to our 22 colleagues, meet senators, congressman. That’s how democracy works. If this passes, 90% of the legislature will eventually say that we should have done this years ago.  I’ll work until 2 am, too. It’s not about silencing democracy. Memorializing resolutions enables lazy people. It’s a win/win for everyone if this passes.”

21:42 – 23:39
Legislator David Donaldson
“Constituents want to know where we stand and memorializing resolutions are useful for that reason.”

23:40 – 27:07
Legislator Chris Allen
District 2 (Town of Saugerties, Village of Saugerties)
Democrat, Republican, Green, Working Families, Independence
“The intent of a letter having the same impact as a memorializing resolution is not true.  This is a template that legislators follow. They are going to read this, see the work, read the same language as professional lawmakers and respond. I have never written one partisan word in any of the memorializing resolutions I have created. I’ve asked for minimal help, so for it to be suggested that legislators are lazy that’s disingenuous or delusional.”

27:09 – 28:09
Legislator Ken Ronk
“I sent a letter to Governor Cuomo asking for funding for the Belleayre project before the memorializing resolution was sent to him. I was called by his office where they reported that the Governor received my letter and that funds in the amount of $3 million were allocated.  It was approved even before they received our memorializing resolution.”

NOTE:  In most cases, letters can be sent by the approval of the majority.  Executive branches, such as Mayor or County Executive, have the authority to send letters at their discretion but they do not make laws. Only the legislative branches do.

28:15 – 29:10
Legislator Chris Allen
“Susan Zimet changed the law with a memorializing resolution,  making it necessary to mark rail cars when they are carrying radioactive materials.  That began  here with the Ulster County Legislature.”

30:42 – 31:31
Legislator Hector Rodriguez
“Debate and discussion is part of a larger conversation and a memorializing resolution helps in making that so.  They haven’t diminished my ability to do my job.  I am really hopeful that we will keep this as a part of our arsenal.”

31:32 – 33:29
Rebecca Martin, KingstonCitizens.org
“I’d like to request to include in your thought process the public, and how memorializing resolutions act as a way to engage public debate which is something I’m not hearing in your discussion tonight (of those supportive of a ban). Citizens appreciate proclamations and letters as a tool, but memorializing resolutions are different. They give us (the public) a chance to voice in and to be a part of the decision-making process.”

35:57 – 36:46
Rebecca Martin, KingstonCitizens.org
“In your discussion tonight, the concerns made by the public is not being properly addressed in considering a ban.  Memorializing resolution is an important tool for us.”

36:48 – 38:03
Ilona Ross, Citizen
“I’m wondering if a ban on memorializing resolutions is meant to be a muzzle on your colleagues?”

NOTE: As mentioned before, there is a big difference between executive and legislative branches in government. Letters from the legislature can be sent when approved by the majority.  Executive branches, such as Mayor or County Executive, have the authority to send letters at their discretion.

38:34 – 41:51
Ilona Ross, Citizen
“Does the County Executive have the authority to submit memorializing resolutions? “ and discussion with Legislator Craig Lopez, District No. 14  (Town of Shawangunk, Town of Wawarsing). Republican, Conservative, Independence

41:52 – 42:38
Legislator David Donaldson
Suggests that a ban will ‘muzzle’ legislators. That although there are some who misuse them, it doesn’t warrant a ban.

42:39 – 43:12
Vote to pass a resolution to prohibit memorializing resolutions passes through committee, 4/3.