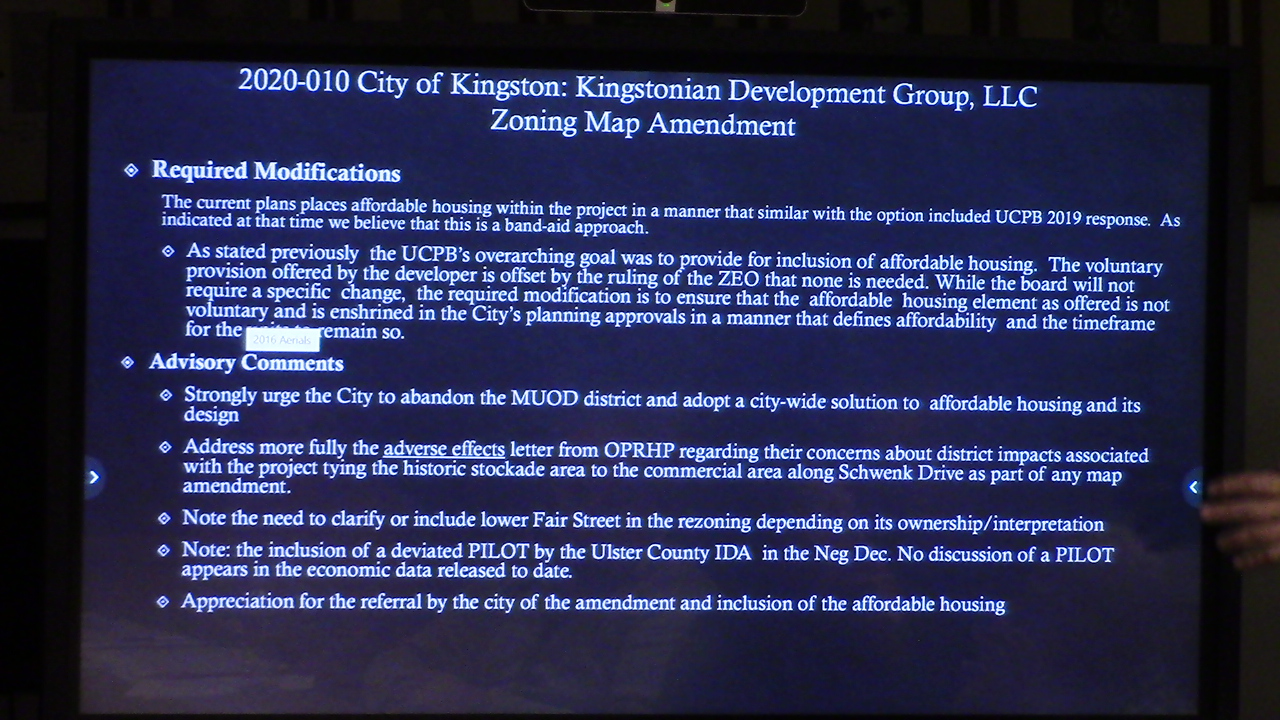 “When you read the negative declaration by the planning board (for the Kingstonian Project), they almost don’t seem to get the gist of that letter from the Office of Parks Recreation & Historic Preservation (OPRHP) relative to why there is an impact on the stockade district.”
– Dennis Doyle, UCPB

The following is video from the meeting filmed by The Kingston News and brought to you by KingstonCitizenes.org. The blog image captures the required modifications and UCPB advisory comments.

2:26 (loosely transcribed) Kingston’s Comprehensive Plan and its affordable housing requirement is for any new or expanding building or development. It wants to abandon the Mixed Use Overlay District (MUOD) in favor of a citywide standard. The UCPB recommends it should be simplified and “a standard set of rules regarding the provision for all multifamily residential applications in the city should be promulgated regardless of location.

7:41 (loosely transcribed) County recommendations. Overarching recommendations rest on the City of Kingston’s own planning documents. We find the map amendment to be inconsistent with the purposes of the MUOD and the CP. and therefore, it should not be implemented without clarification of the ability of the District to be used to issue special permits for new construction. Additionally, if such new construction is allowed by special permit, a provision of affordable housing shall also apply.

8:35 (loosely transcribed) Doyle outlines the county’s original recommendations: Option 1, To follow the recommendations of the CP and abandon the MUOD in favor of establishing City-wide affordable housing regulations for all multi-family development, etc. Option 2, To modify the existing MUOD by specifically allowing new construction under the special use section and add the applicability of the affordable housing provision to this use. This is more of a band-aid approach to achieving the goals of the CP for the more limited area of the MUOD. If you are going to amend the map, then you must amend the language in the statute.

9:53 (loosely transcribed) The negative declaration issued by the Kingston Planning Board addresses the issues of whether or not there is a material conflict with adopted plans or goals. The Kingston Planning Board said that they found no conflict. But they do specifically note the 14 affordable housing units is a welcome inclusion. The lead agency determination regarding the zoning petition and its lack of conflict with community plans and goals as officially approved is the critical question before the Common Council and before the County Planning Board. The Common Council is somewhat bound by the lead agency’s determination. But that bounding is in response to the voluntary inclusion of affordable housing as part of the project.

11:15 (loosely transcribed) The neg dec addresses something called community character and historic resources. OPRHP has issued an adverse effect for the project. “The lead agency determination regarding Community Character the zoning petition and its lack of conflict with community plans and goals as officially approved is the critical question before the common council.” When you read the negative declaration by the planning board, they almost don’t seem to get the gist of the letter from the OPRHP relative to why there is an impact on the stockade district….but they never succintinly address the tie in between moving the project elements down slope or cross slope to tie into the schwenk drive commercial area as compared with the traditional ending of that at the Montgomery Ward building or at the top of the hill.

13:16 (loosely transcribed) Required modifications: the place where we are as pertains to affordable housing. ZEO provision says affordable housing is not needed with new construction yet the applicant voluntarily provides it. If that’s the case, then the voluntary provision by the applicant should be enshrined in the city’s planning approvals – as it could be voluntary today and during planning approvals, disappear tomorrow. The UCPB all agreed.

16:47 (loosely transcribed) Advisory comments. As stated previously, the UCPB’s overarching goal was to provide for inclusion of affordable housing. The voluntary provision offered by the developer is offset by the ruling of the ZEO that none is needed. While the board will not require a specific change, the required modification is to ensure that the affordable housing element as offered is not voluntary and is enshrined in the City’s planning approvals in a manner that defines affordability. The UCPB’s advisory comments are to strongly urge the city to abandon the MUOD district and adopt a city-wide solution to affordable housing and its design; Address more fully the adverse effects letter from OPRHP regarding their concerns about district impacts associated with the project tying the historic stockade area to the commercial area along Schwenk Drive as part of any map amendment; Note the need to clarify or include lower Fair Street in the rezoning depending on its ownership/interpretation; Note: the inclusion of a deviated PILOT by the Ulster County IDA in a Neg Dec. No discussion of a PILOT appears in the economic data released to date; Appreciation for the referral by the city to the amendment and inclusion of the affordable housing.

The UCPB said that the rezoning offers the city a clearer recommendation or response to the adverse effect letter. As part of the re-zoning they should look at this, understand and reexamine and clarify the negative declaration in terms of why it’s not an adverse effect in regards to zoning….there are state monies involved here. The state monies will require that they clear up that adverse effect letter otherwise, they’ll run into issues with the state funding. Discussion regarding Fair Street ensued. SHPO calls Fair street historic in some instances.

24:33 (loosely transcribed) On the project being a public/private partnership. We’ve seen a lot of positive economic data put out by the applicant. The negative declaration indicates a deviated PILOT by the UCIDA, meaning that it’s not a standard PILOT under the unified tax exemption policy and we don’t know what it will be. No discussion of the PILOT appears as the economic data released to date. We want transparency here – what the applicant is asking the public to participate in as the project goes forward. The IDA has a matrix, and they are going to propose that the IDA goes outside of the Matrix. In a public/private partnership, you should put everything on the table to fund your garage. The board agreed that it should be included in their comments as it’s in the Neg Dec determination and therefore a part of the SEQR process after discussion.

30:54 (loosely transcribed) Why was this matter sent back to us? Because they completed the SEQR process and we asked that they do so once the SEQR process was done. We asked to resubmit with the affordable housing provision. One of the UCPB members felt the language needed to be stronger. Dennis was concerned about changing the language from before. Public/Private partnerships should be much more up front about what they are asking the public to participate in. So far, we have seen no indication of what the public is being asked to participate in. It’s like traffic or anything else. There should be more transparency as a recommendation.

The UCPB approved the items.