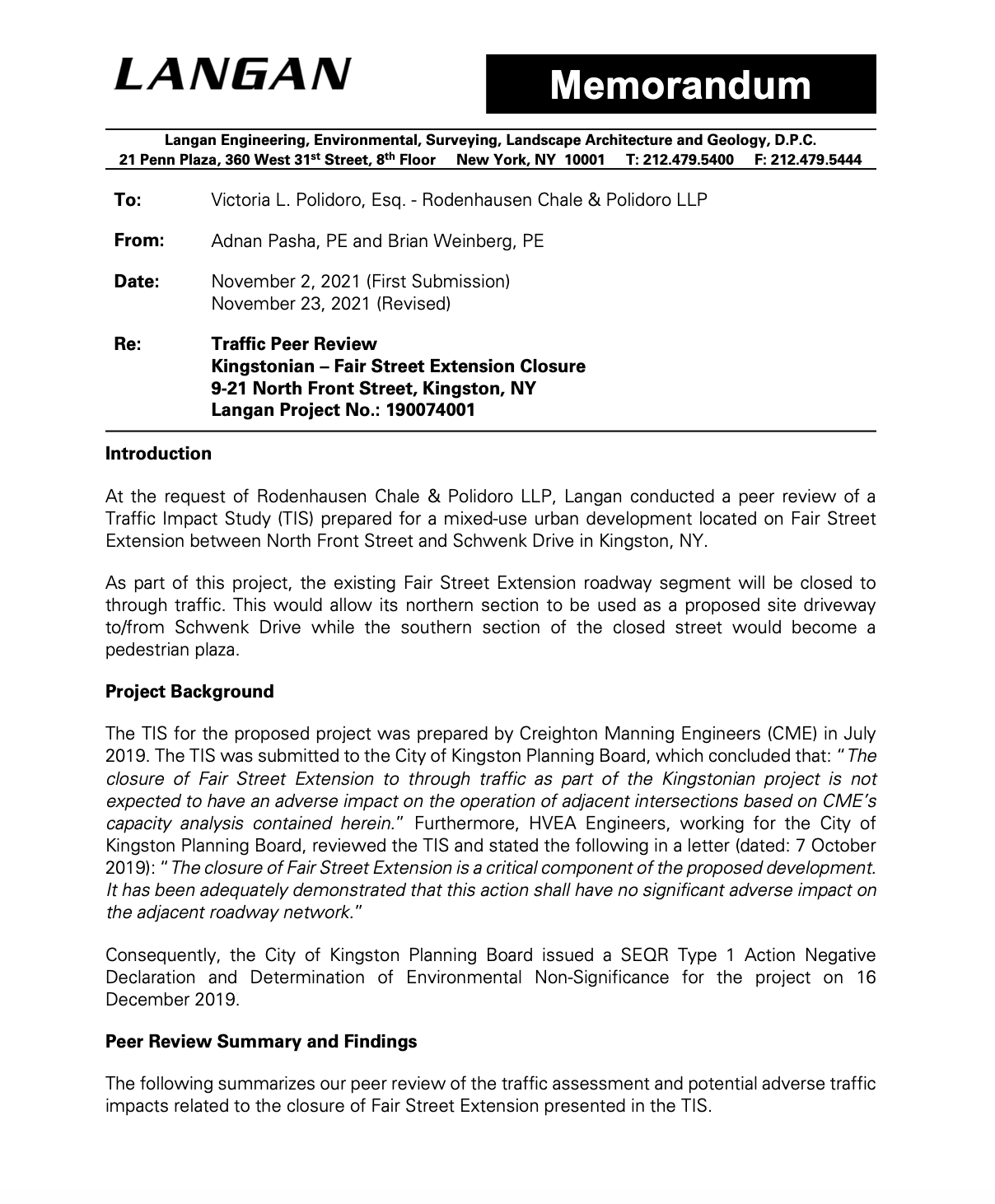 The image above is a page from the LETTER submitted by Victoria Polidoro (12/2) that includes a peer review of the original traffic study that guided, in part, the Kingstonian environmental review process. The peer review begins on page 47.

On Thursday, the Kingston Common Council held a public hearing on a proposal for “partial abandonment” of Fair Street Extension. The hybrid meeting (held both online and in person at City Hall) was over three hours long due to technical problems that created big gaps in the audio and streaming service. Many of the public in attendance gave up and logged out of zoom (there were nearly 100 people on zoom earlier in the evening).

City of Kingston’s lack of preparedness for Hybrid Meeting

The lack of preparedness by the city for such an important public hearing has got to be highlighted. In September, Governor Hochul extended virtual public meetings. Education Council Consortium Co-Chair Shino Tanikawa said “Conducting hybrid meetings has been extremely challenging for Citywide and Community Education Councils and participation by the members of the public has plummeted since the OML waiver expired in late June. To exacerbate the issue, the infection rates have climbed to over 4%…making many parents weary of in-person meetings. I am deeply grateful for Governor Hochul’s initiative to allow public bodies to return to virtual meetings. We will be able to enhance participation and fulfill our responsibilities more effectively and without compromising our health.”

Why is the city hosting hybrid meetings before they are able, and why go back to hybrid right now anyway with new infections on the rise in Ulster County?

At least one member of the public, Kingston City resident and President of the Board of Education (an elected position) James Shaughnessy, read his comment while the streaming system was down. It lead to his testimony not being captured on video. Upon learning this, Jim called into zoom and asked for the opportunity to re-read his comments so that they were recorded and was denied.

We were able to get a copy of his testimony where he writes:

“I would like to make a few general comments about the Kingstonian project.  It was one year ago today that the Kingston city school board voted against approving the Kingston PILOT.  I personally had aspersions cast against me by the developers and several prominent politicians for my vote.  I would like to say that I have always silently objected to saying this project is by local developers.  I am of the opinion that the Bonura Hospitality Group is the prime behind this project.  I have often wondered if Joe Bonura, Jr has ever slept a night in Kingston. Thankfully, the IDA didn’t approve a 99 year PILOT like the Bonura Group was granted for a Poughkeepsie apartment complex.”

What was important and new that evening was a peer review of the first traffic study, that in part guided the Kingstonian environmental review process, created by Brian Weinberg, PE of Langan Engineering. Weinberg brought to light several important key points during his testimony on Thursday:

2.   “Key intersections were left out of the study area and thus the intersection capacity analysis was not completed. Along these corridors include certain intersections along Green Street, John Street and Clinton Street that would see between approximately 35 and 100 additional vehicle trips per hour….left out assessments of critical links such as Frog Alley and North Front Street where there would be a substantial number of diverter vehicles that would turn left from Schwenk Drive onto Frog Alley. Along Frog Alley there’s a fire station, and with the high volume of additional diverted traffic that would be sent onto Frog Alley could potentially affect fire station operations.”

3. “During construction of the project while Fair Street is closed and before any other pedestrian accommodations are built, pedestrians would have to travel a longer way to get between Schwenk Drive and North Front street which could be difficult especially for pedestrians with disabilities.”

The council left the public comment period open through Monday, December 6th at 5:00pm, a standard practice. The legislation is on their agenda to discuss during Caucus and then the resolution is likely going to be up for a vote during their full council meeting on Tuesday. There is an open public comment period during the full council meeting where the public will have a final opportunity to advocate. Good Cause Eviction is also on the agenda, with a first reading of this local law (a vote would follow after its second reading in January).

Jennifer O’Donnell
“How many of you saw the film The Lost Rondout made by our friends and neighbors? It was a beautiful and sad story about our community being torn apart by big interests, bigger than ourselves. Spaces that we all shared and paid for through work, through taxes, through our small family businesses, and by the promises of economic development were destroyed by some very powerful government actors.”

Cheryl Schneider
“If the Kingstonian can’t make a buck doing it the legit way without us giving away our streets and our schools and our tax money, then maybe they have a sucky business plan and they need to reconsider and move out of the way and make room for somebody who can…this is not about the people of Kingston it’s about profit for a handful of people who happen to be real cozy with a lot of elected officials.”

Tanya Garment
“This development is going to be a pretty sweet deal free land and not only the parking lot also a public park and now a public street…they will get money to rebuild the warehouse that Herzogs changed from a building and made it to a warehouse. They’re going to get money to pay for the foundation of the structure above the free land. They’re going to get money to build a bridge to funnel people into Jordan’s other (Herzog’s) property. They’re going to get excusals from offering the amount of parking that our code currently requires. They’re going to get tax breaks to cover the parking that they are building and then it’s also in an Opportunity Zone so theoretically the Kingstonian project could be a 100% covered by public funds….We are just talking about this now, towards the end of the process, as this is the way that the city determined the process. The process did take a long time, part of that was the DRI process and people did try to talk about the closing of the street at that time but the elected officials that were questioned about it refused to disclose it.”

Patrick Logan
“The traffic that currently uses Fair Street Extension will necessarily be routed elsewhere, and the associated traffic impacts will be felt throughout the Stockade and cause congestion that will diminish the historic ambiance of the neighborhood. In particular, traffic along Clinton Avenue, a quaint street that served as the city’s very first historic district, will be increased fourfold.”

Jennifer Armstrong
“During the November 11th Dover Kohl (Form-Based-Code) presentation, Dover Kohl discussed several big ideas to inform the new zoning code after collaboration with city residents in a series of community engagement events. Included in these core concepts were small scale as of right developments, relationships of buildings to streets and surrounding buildings re-evaluating how much parking we really need, and improved public transport walkability and more complete streets. The progress presentation also highlighted the importance of maintaining small block size and avoiding street closures. Closing Fair Street at this time would be a disservice to the taxpayers investment and rezoning.”

Ilona Ross
“I feel compelled to debunk a few misconceptions about this project. It is not privately funded, it is publicly funded with cash from New York State, property tax breaks and the Opportunity Zone boondoggle. The developer’s own application puts their investment at around six million dollars and the tens if not hundreds of millions that a few rich individuals will take home comes from the pockets of the people of Kingston, Ulster County and New York.”

Justin Hoekstra
“There’s a lot of good development spots where you can build a bunch of luxury housing. Having to tear down an old warehouse and having to shut down and give away a public street in order to build this luxury high-rise in uptown is nuts.”

Victoria Polidoro
“In 2011, the City of Kingston supported a plan which identified the fair street extension as an important roadway connection to uptown Kingston and a potential catalyst for smart redevelopment along Schwenk drive. You are now foreclosing these future smart growth opportunities at the same time that you’re doing a zoning revision by discontinuing the connection between the stockade area and the area immediately outside of it…how can you as members of the common council sworn to act in the public interest approve of this without knowing exactly what will be discontinued and without a plan for what happens between now and potential construction 15 years in the future?”

Rashida Taylor
“Tonight’s meeting should have been postponed as there was a lot of technical difficulties and a lot of people who wanted to make statements who were unfortunately unable to stay through the meeting…this project has never been centered in the community and it doesn’t meet our needs. It’s not for us the real residents of Kingston. The real Kingstonians are being asked to bankroll this project…”

Rebecca Rojer
“I want to express my vehement opposition to the abandonment of Fair Street Extension, as it continues to be the safest and most direct bicycle route to the plaza allowing cyclists to access groceries, UCAT, and the Midtown Linear Trail…I fear our leaders are making a terrible mistake handing this public asset to private developers and for free no less.”

Phil Erner
“Once there was a wicked wicked plan, Kingstonian was its name. To house the wealthy and the few while poor folks could not stand…”