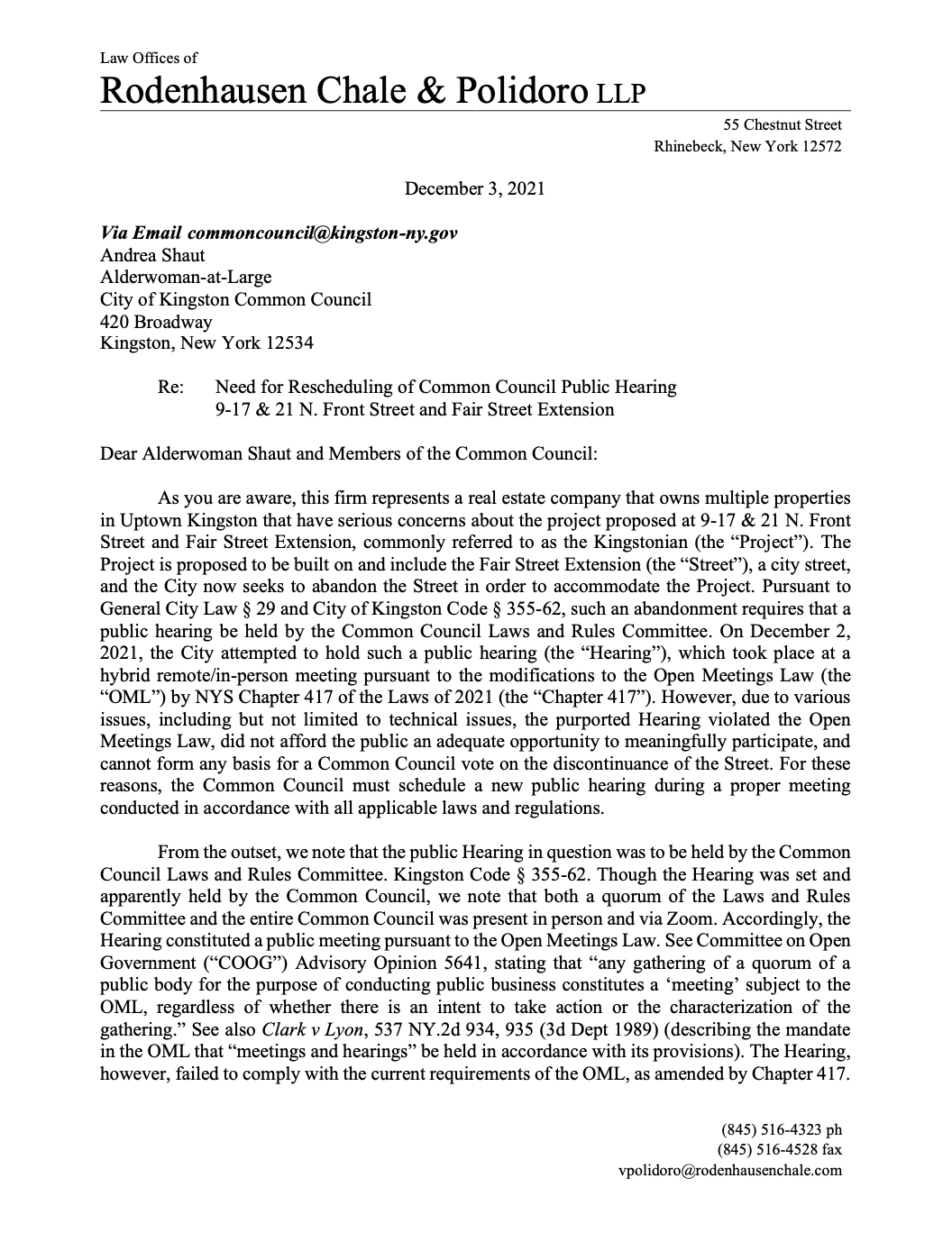 In a LETTER DATED DECEMBER 3rd submitted by attorney Victoria Polidoro from Rodenhausen Chale & Polidoro, a request was made to the Common Council regarding the public hearing for 9-17 & 21 N. Front Street and Fair Street Extension.

“On December 2, 2021, the City attempted to hold such a public hearing which took place at a hybrid remote/in-person meeting pursuant to the modifications to the Open Meetings Law (the “OML”) by NYS Chapter 417 of the Laws of 2021 (the “Chapter 417”). However, due to various issues, including but not limited to technical issues, the purported Hearing violated the Open Meetings Law, did not afford the public an adequate opportunity to meaningfully participate, and cannot form any basis for a Common Council vote on the discontinuance of the Street. For these reasons, the Common Council must schedule a new public hearing during a proper meeting conducted in accordance with all applicable laws and regulations.”

Polidoro said that the meeting failed to comply with the current Open Meetings Law. “Throughout the meeting, the audio broadcast over both Zoom and YouTube dropped repeatedly, and often during public comments. Entire speakers provided comments in person that were never broadcast over Zoom or online. As a result, the many members of the public that chose to attend the Hearing remotely were deprived of the opportunity to contemporaneously listen to what occurred at the meetings in direct violation of the OML. Despite having been promised that those online would be called intermittently with those testifying in person, the Common Council instead chose to remedy their technical issues by calling all commenters present in the Council Chambers first. Those physically present in the Common Council Chambers disproportionately consisted of the developers spearheading the project, their close associates, and union members in the region who stand to gain from the Project being constructed. The overwhelming testimony in favor of the closure of Fair Street Extension and in support of the project likely had a chilling effect on the many speakers who testified via Zoom against the proposal who were mostly relegated to the last hour of public testimony as a result and had a disparate impact on their ability to participate as a result. This deprivation materially affects the legitimacy of the public hearing because the public was unable to meaningfully participate.” she wrote. “As a result of, among other issues, the hour-plus of technical difficulties and delays, the Hearing commenced much later than was scheduled to, was paused several times, and ultimately dragged on late into the night with no apparent end in sight. We observed multiple remote participants leave the meeting before they were given an opportunity to participate because the Hearing was being unreasonably delayed and because it was unclear whether they would ever actually be given an opportunity to speak.”

“We appeal to the Council’s sense of decency and equity,” wrote Polidoro. “Its members know that what occurred at the Hearing was a technical disaster and that it directly affected the ability of the public to participate. The Councilmembers are public servants that have an obligation to act for the benefit of the residents of Kingston and that obligation has not yet been fulfilled with respect to the abandonment of the Street. Basic principles of fairness should lead the Council to schedule a new public hearing in order to solve these issues and prevent a tainted meeting from purportedly supporting the decision to give away a public street for private development with minimal, if any, benefit to the public. The Project is months, if not years away from ever receiving final approvals and would not benefit from the Street being closed in the interim. There is absolutely no need for the Council to rush to vote on the abandonment at this time. Any decision to plow ahead with the abandonment despite a patently deficient public hearing raises obvious questions regarding the Council’s intent in doing so.”

If the Council moves ahead with a vote at its next meeting, an action will be filed at 3:00pm on Monday, December 6, 2021, at the Ulster County Supreme Court seeking, inter alia, a temporary restraining order enjoining the City of Kingston Common Council from considering the Resolution to Discontinue Fair Street Extension at their meeting to scheduled to be held on December 7, 2021 or at any time until a new and legally compliant public hearing on the proposed road abandonment is held.