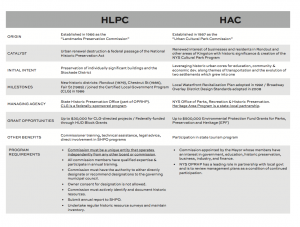 The streamlining of commissions had come up as an item to place in Kingston’s new CP, but in 2015 – those who were concerned brought in State professionals from both SHPO and the Preservation League on the matter that led to it being retracted in the final document.  VIEW Daniel McKay’s Testimony.

Kingston City Planner Suzanne Cahill said to council members that the final CP had a goal to streamline commissions, it did not. However, it turned up again in the CP Zoning recommendations somehow.

During the educational forum, the Mayor asked, “As properties are identified as landmarks, to bring them up to the standards to today’s Historic Preservation requirements can be expensive. In Kingston, people with money buying these historic houses raise the property values tremendously.  Because we have a housing stock of historic house, how do we provide access for all of those moderate/ low-income individuals? It’s a struggle that we have and may lead to gentrification if only some kinds of people can afford these houses.”

Erin Tobin, Vice President for Policy and Preservation, Preservation League of NY, said in response, “In many communities, there are vacant buildings and no one investing in them. Any investment requires the Low-Income Housing Tax Credit and the Historic Preservation Tax Credit. You might contrast that with the only other analogy in NYS would be Brooklyn or NYC, where people are moving into neighborhoods that have lower property values and raising them. I don’t know if that’s Historic preservations fault, necessarily….one can have flexibility in approach….you can find ways to make that more affordable. I can’t underscore the importance of the Historic Preservation Tax Credit that we have in NYS….for people investing in historic homes. It is a rebate, at or below $60k that provides initial money in.  Communities can strategize to find ways to turn it into a loan, so the homeowner doesn’t have to put that money up front, or most of it…there are land banks doing that…I can’t say that I’ve seen a big issue with preservation causing gentrification. If anything, I’m seeing that in areas where there are preservation standards investors are using the low-income housing credit as a tool to use as an incentive.”

But it came up again in May’s Laws and Rules Committee meeting, where Majority Leader Rennie Scott Childress said, “…This is something that’s about rich people. And so we have to be very careful because we want to protect our historic heritage, but we also want to make sure that it’s not something that begins to price people out of living in Kingston. And so that’s something for us to keep in mind.”

You can watch the video where Erin Tobin dispelled this concern.   VIEW starts 27:31

“I believe justification does exist to maintain both the Heritage Area Commission and a Historic Landmarks Commission. I think an approach to look at is a coordinated review process which may include one application which would be reviewed by both Commissions collaboratively.” VIEW

In comments made by current City of Kingston Mayor Steve Noble before he was Mayor portrays exactly what preservationists and citizen advocates are requesting.  What happened to Mayor Noble’s stance?

The Mayor believes that merging commissions without any substantive discussion about how the new combined commission will function and how the regulatory review process will change as a result (and that our state-level support will not be impeded) is not necessary to make clear beforehand. What is meant to be a marriage is more like a shotgun wedding.

Furthermore, the current legislation presented by Kingston’s Corporation Council has potential flaws, working with Kingston’s existing preservation ordinance that is based in part on a previous preservation model law that is 30 years old. It has been changed several times, to make that ordinance more murky  Because of which, the HLPC has taken up the preservation model law that is more up to date created in 2014, that provides NYS standards meant to help in providing good framework.

Streamlining isn’t yet consensual. If done at all, here are some of the real concerns:

1. Valuable state-level support in the way of training and grant opportunities may be in jeopardy if this new arrangement violates the terms of an agreement between CofK and NYS.

2. The proposed legislation goes beyond its stated intent to combine two commissions. Buried in the text are small but significant tweaks to the existing procedures of the HLPC, which prior to now have not been discussed or studied.

3. The proposed legislation misses a key opportunity to incorporate the 2014 Model Preservation Law, which offers clearer language and procedures.

4. The public is in the dark about the motivation for the accelerated timetable for this merging. At a recent Laws & Rules Committee meeting when asked what the hurry was, the deputy corporation counsel stated that there were other factors at play that he did not want to share in a public meeting.

2 thoughts on “The Proposed Legislation to Merge Kingston’s Historic Commissions is not Ready for a Public Hearing.”