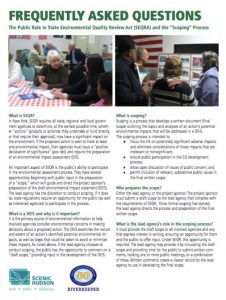 Next up?  A Draft Scope Document.

Last week, KingstonCitizens.org participated in one of the ongoing CAPP (Coalition Against Pilgrim Pipelines) meetings that was held in Kingston.  In attendance to help us all to clarify steps were Scenic Hudson, Riverkeeper, Food and Water Watch and other representatives from as far away as New Jersey.  The volunteers and activists, long awaiting the Draft Scope in SEQR (State Environmental Review Act), were anxious for an update. (More on that below).

What is a “Draft Scope” document?   A detailed description can be found in the Department of Environmental Conservation’s (DEC) SEQR guideline where it is described as  “a process that develops a written document that outlines potential environmental impacts of an action (the project) that will have to be addressed in a DEIS or EIS (draft environment impact statement).  It’s purpose is to narrow issues and ensure that the draft EIS is accurate and complete, ensuring public participation, open discussion and inclusion of all relevant public issues for a final written scope.”

To put it in simply, it is exactly like a table of contents for an environmental review.  Kingston being an Involved Agency means that we will have the opportunity to shape it.

What makes us an Involved Agency?

Digging up backyards in Kingston’s Ward One along the NYS Thruway is in the proposal, making the City of Kingston an Involved Agency in SEQR. 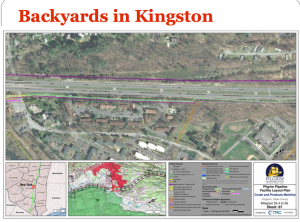 Therefore, our next steps must be to keep an eye out for the Draft Scope document. Once released, we will have a window for review so to make certain that any and all potential environmental impacts in our community are included for further study. (Although there is typically a 30 day window to make comments on the scoping document, Environmental and grassroots groups have already formally requested a 90 day draft scope comment period along with meetings in every impacted county, and every city in addition to one scoping meeting in NYC.)

Fortunately, elected and appointed officials in the City of Kingston have been incredibly responsive in a timely way to this proposal, hitting every mark with clarity and strength. Along with both the executive and legislative branches in concert here, Kingston’s CAC (Conservation Advisory Council) has taken an active role in reviewing materials and making excellent recommendations to our elected officials.  We thank them all for being such solid partners in this.

What’s holding up the Draft Scope Document?  Potential Environmental Justice Communities – and Kingston should be listed as one of them.

As mentioned, we have been expecting the release of the Draft Scope Document for months now – ever since it was confirmed that the DEC and NYS Thruway Authority would co-lead the SEQR review process.  So what’s the hold-up?

Apparently, the Department of Environmental Conservation has two policies that have potentially come into play and this could potentially help us. 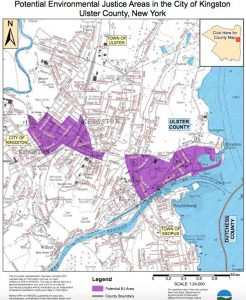 There are nine potential environmental justice (EJ) communities in New York State as it pertains to the proposed Pilgrim Pipelines project. This determination is based on data from the 2010 census.  Although implementing the policy is not mandatory, it appears that it is being considered and therefore, there will be no draft scope until an extra consultation plan is in place.

As you can see here, the City of Kingston has a potential Environmental Justice (EJ) area according to the attached DEC map. However, Kingston is not one of the potential EJ communities identified by Pilgrim Pipelines LLC in their now defunct preliminary DEIS.

The City of Kingston and its residents should push the DEC and NYS Thruway Authority (the co-lead agencies in SEQR) to require Pilgrim Pipeline LLC to conduct an enhanced participation plan under the DEC’s Commissioner Policy #29 for Kingston by using this attached LETTER modeled after Albany’s South End Community.  It’s important, too, that we do this before the end of the year.

It is unclear how this will be implemented as it pertains to Pilgrim.  The policy is being reviewed, however, and will no doubt inform this process in one way or another.

Those who have followed us over the years know how important it is to us to advocate for easy access to good information. From there, understanding proper process and the laws that are in place to protect us is imperative.

There are many steps up ahead, so it was heartening to learn the other night that the proposed Pilgrim Pipelines in part is a NY State project, therefore the laws are specific to NYS and not the federal government. This works in our favor especially in today’s climate, and we are thankful to have SEQRA guide us toward the correct outcome. But it only can occur if more of us commit to seeing the process through until the end by insisting on facts, following process and utilizing the law that protects us.

We can do this.