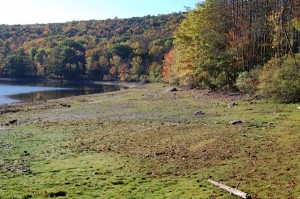 Cooper Lake. 10/4/14. This season was classified as “abnormally dry” by the U.S. Drought Monitor. Although New York is a water-rich state, our weather has become less predictable, rainfall is faster, there is more erosion, less snowmelt, and faster rates of transpiration.

In the past, communities and regions depended on large corporations for jobs. Today, corporations that employ low-skilled labor move into areas desperate for jobs where they can pay less than industry standard wages. They mechanize to eliminate jobs and maximize profits. They don’t pay the cost of the dangerous chemicals they leave in our air and water. When they’ve depleted local resources or get a better deal elsewhere, they move on.

Before we give Niagara millions of dollars in tax breaks and grants that NY tax-payers must subsidize – and more than 25% of our water capacity that we may need to create quality jobs – we need to know if Niagara is really a good deal and safe choice for us. Twelve people – only six of them elected by us – have commandeered the decision making about the Niagara project for six communities. Some have signed a “non-disclosure agreement” with Niagara and are trying to make most of the decisions out of public view.

Selling our water in these uncertain times is not good policy for our region.

* Tell your elected officials you want our region to create quality jobs that support families. *

* Tell them we want our tax dollars reinvested in NY businesses, not given away in windfall tax abatements to out-of-state corporations.*

* Ask our leaders for their business development and job creation plan! *

6 thoughts on “Is Niagara Bottling Company right for Ulster County?”