NOTE:  We are not a 501c3 not-for-profit corporation and therefore, do not accept funding for this work. 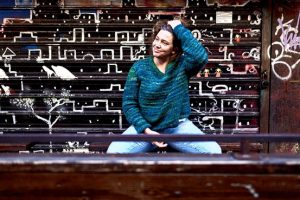 A native of Maine, Rebecca Martin lived in New York City for a decade and worked at MTV Networks before starting her own production company and moving upstate to the city of Kingston. In 2006, she co-founded KingstonCitizens.org  with Arthur Zackiewicz to understand the inner workings of her new hometown’s local government and to create a platform for citizen engagement. Since then, Martin has organized more than 100 different initiatives and projects, including serving as ‘ground zero’ for information and civic engagement during the Niagara Bottling Company’s attempt to purchase a significant share of Kingston’s municipal water supply. Through KingstonCitizens.org’s unique partnerships, strategic planning, and community organizing, the company withdrew its proposal after five months of public scrutiny. KingstonCitizens.org advocated for a Water Powers Referendum, which amended Kingston’s City Charter and passed by a landslide. This amendment gives the public a layer of protection for how its water is sold outside of Kingston city limits.

Suggestions from drug specialists will empower patients to settle on sheltered and educated choices with respect to their wellbeing and the utilization of these nonprescription items. ED problems have got a solution in the form of cialis help. What's more, patients with left ventricular surge check (eg, aortic stenosis and idiopathic hypertrophic subaortic stenosis) can be delicate to the activity of vasodilators, including PDE-5 inhibitors.

Martin previously served as Executive Director of the Kingston Land Trust. Under her leadership, the trust was touted as a ‘National Model’ by the Land Trust Alliance for the organization’s work to develop programming that could bring the community closer to its open spaces. Martin was instrumental in starting the non-profit group’s Urban Agriculture initiatives, Kingston’s Rail Trail Committee and programming, and an effort to protect African-American history and burial grounds in the City of Kingston.

She was recognized as “Community Activist of the Year” by the Ulster County YWCA and in 2015 was named “Best Activist in the Hudson Valley” in Hudson Valley Magazine’s annual readers’ poll for “Best People of the Year”.

As a musician, Martin tours the world performing her original music in prestigious venues such as Carnegie Hall and The Kennedy Center. She has nine critically acclaimed recordings, many of which have been featured in The New York Times, Wall Street Journal and dozens of other influential publications.

Martin has been a resident of the City of Kingston since 2002, and lives with her husband, jazz bassist Larry Grenadier and their son, Charlie James.

Since 2017, Martin spends half of her time as the Senior Campaign Coordinator for the Water Quality Program at Riverkeeper, charged to protect the Hudson River and its tributaries, and protect the drinking water of 9 million NYC & Hudson Valley residents.  She has also recently joined the Beyond Plastics team, a platform dedicated to building a movement to end plastic pollution led by the formidable Judith Enck.

7 thoughts on “Mission / Director / Advisory Board”