Please attend the upcoming Town of Ulster (ToU) Regular Town Board Meeting on Thursday, December 21st at 7:00pm and request the following during public comment (*)

(*) Citizens are invited to give public testimony at the beginning of the regular ToU Town Board meeting on any items that are listed on the agenda (at this time, the agenda is not yet posted. We will update the public on our Facebook event page when it is available.  Please ‘like’ our event for updates VIEW). Citizens will have another opportunity to speak that evening on items not on the agenda at the end of the Town Board meeting.  We ask that citizens be respectful when addressing the Town Board, and particularly those who do not live in the municipality.  Keep your testimony to 3 minutes or less.

On Thanksgiving day while making a holiday meal for friends and family, I received news from a guest that a gas-fired power plant had recently been proposed in the Town of Ulster.

In addition, the Town of Ulster had its regular Town Board meeting a few days prior to the Thanksgiving holiday where the applicant and consultant gave a short presentation followed by the Town of Ulster making a request to be Lead Agency in SEQR (State Environmental Quality Review). That gave Involved Agencies only a 30 day window starting before one holiday to another (figures) to dispute their request, if applicable.

After eleven years, I had planned to step away from my volunteer work at KingstonCitizens.org to focus my efforts solely on my part time position in Water Quality at Riverkeeper (which I love, by the way) and my music career, come 2018. The news certainly dashed my plans.  The balancing act continues!

A peaker project in the Town of Ulster.  It wasn’t unfamiliar to me. In February of 2015, when Niagara Bottling pulled their proposal from a Tech City location in the Town of Ulster,  I remembered hearing rumors of such a project and thinking to myself that after coordinating an intense five month citizen campaign and now having to find a way to move a timely charter change to address water powers with a referendum in the fall of that year, I’d have to come back to it if or when it appeared.

Didn’t Ulster County just recently install a large solar array near this location (and that feeds into the Lincoln Park substation, the same substation that would be used by this proposed project)?  Furthermore, in December of 2016, Ulster County was prominently featured by National Geographic  to highlight some of the County’s environmental achievements.  That’s international coverage. So how would a natural gas power plant fit into our progress? Who attracted a midwestern company to come to the Town of Ulster with such confidence to propose such a thing?  At the December 7th Town or Ulster Town Board Workshop meeting during public testimony, a citizen called it a ‘tale of two cities’. “How do you have a solar array project on one end of a property and a natural gas power plant on the other?”

I’m about to get into a whole bunch of technical stuff to the best of my ability, only because I want readers to understand how the coalition letter came to pass as well as our call to action.  SEQR is nothing new. I’m hoping that you will recall some of this language from the Niagara Bottling and/or the Pilgrim Pipeline proposals.  If you need a refresher, you can go here  VIEW

In the project’s environmental assessment form (link above), the “Lincoln Park Grid Support Center” is described, in part, in this way:

“The Applicant, Lincoln Park DG, LLC, is under contract to acquire three tax parcels between NYS Route 32 and US Route 9W in the Town of Ulster which total 120.92 acres, and proposes to construct the Lincoln Park Grid Support Center on a 4± acre portion of the property, with access from Frank Sottile Boulevard. The proposed facility is a natural gas-fired power plant that will supply power to the electric grid in the region….The facility will include a system of containerized batteries and a reciprocating engine generator system that is fueled by natural gas, with the capability to use on-site diesel when the gas supply is disrupted. The generator system will be housed within a steel Butler building and will require two exhaust stacks for combustion emissions which will be a maximum of 100 feet in height. The system will be available to the grid 24 hours a day and will operate based on the needs of the grid, with very little operation on some days and continuous operations on other days. The facility is expected to operate an average of 6 to 14 hours per day. Fuel combustion will result in primary emissions of carbon dioxide (CO2), nitrogen oxides (NOX), and carbon monoxide (CO), and will require an air permit from the NYSDEC. Some ancillary waste will also be produced including used lubricating oil and reagent as part of equipment maintenance.”

On first glance looking at the list of Involved Agencies, the NYS Department of Environmental Conservation (NYSDEC) seemed the best choice for a project that could be seen as a regional one, with potential environmental impacts that include air emissions, visual impacts, wetlands, the project footprint being within close proximity of a principal aquifer, cultural resources and threatened/endangered species  There might be others. As a local matter, there were potential inconsistencies in the Town’s comprehensive plan and zoning code and concerns of something like this being built only approx. 600 feet away from a residential area.

Once a Lead Agency is designated, they may make a determination of significance for the proposed action (project) as being a positive declaration (pos dec) or negative declaration (neg dec) in SEQR.  A pos dec in simple terms means that the project may result in having one or more significant adverse environmental impacts, triggering a full scoping process (to identify all of the potential impacts) with opportunities for public comment and then for appropriate studies to be identified and paid for by the applicant.   A neg dec, means that the proposed action benefits “outweigh its adverse impacts” and would move the project to its site plan without any public comment. As a side note, a neg dec allows the applicant to apply/secure any public funding that might be available to its project. 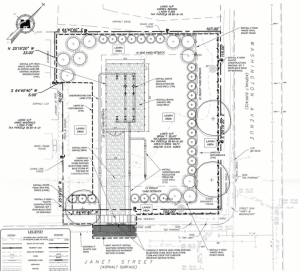 Recently, a citizen of the City of Kingston who lives near a new proposed Gas Regulating System to be located at 245 Washington Avenue by Central Hudson contacted us with some concerns.  Gas and Electric Magnetic Field (EMF) Substations are a part of our landscape in Kingston, given the need for gas and electric in our daily lives.

But process is key, and it was the process that peeked our interest.