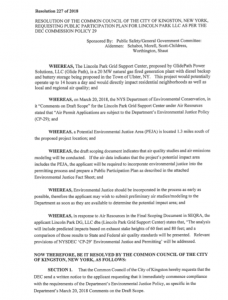 This year, we have witnessed many unprecedented, positive changes in the city of Kingston. One of which was a whole new way of engaging the community with a budget forum held at Kingston City Hall in August as well as an online survey where citizens had the opportunity to voice in on the Mayor’s 2017 municipal budget.

Soon after, the finance committee met on a weekly basis for about six weeks to interview department heads who unveiled their department’s needs.  To be thorough, Kingston Mayor Noble also requested a special committee meeting to discuss special events, fees and to respond to any other concerns raised about the budget. I can’t recall a time when I have seen such transparent and collaborative efforts made between all elected and appointed officials in the City of Kingston.

After hours upon hours of research and discussion, the finance passed the city’s 2017 budget out of committee and on to last evening’s council caucus (12/5). Its fate is now in the hands of our entire common council who will vote to pass the budget or not this evening (12/6).

Some say that the 2017 COK budget is the first in decades where a balanced budget has been achieved that also includes a tax cut.  It’s a forward thinking document; one that places the COK on solid footing for the future.

The highlights include a tax levy of $17,650,940, which is a $0 increase from 2016. What’s really exciting is that it slowly addresses the long-standing issue of the homestead / non-homestead, decreasing the homestead tax rate from $10.16 per thousand to $10.10 per thousand and the non-homestead tax rate from $18.31 per thousand to $18.13 per thousand.  Items such as raises were determined through a multi-member committee. It was a long and well-vetted analysis, using comparable salaries from similar communities. The result moves toward fair pay for all (for both male and female employees alike) and gives Kingston a competitive edge when openings become available in attracting the best and the brightest.

The city will continue to provide extensive services at a cost effective rate, too. You’d be hard pressed to find a private hauler for the price that most are paying through the City of Kingston’s Department of Public Works. We know how important that is to Kingstonians.

BRINGING SOME CLARITY AND UNDERSTANDING TO POTENTIAL DEBATE THIS EVENING.

With ample time for discussion throughout the estimated three-month process, we still expect several items to come to the floor this evening for debate. Below, we’ve tried to pull together a little background to help citizens follow along.

A part time common council clerk position was implemented to assist the council in their administrative needs. This would include creating timely agendas, minutes and even audio recordings of all caucus and council meetings.  It’s the sort of thing that we have been advocating for since we began this work in 2006. It’s an exciting prospect for all citizens.

1) In the City of Kingston’s charter, the city clerk (who is appointed by the mayor) manages all “records, documents and other papers for the city”.  Their role also includes being the council’s clerk without any detail outside of going to monthly council meetings.  In other words, a single position is to maintain the needs of both the executive and legislative branches of government, the latter to a degree.

2) Some believe that it makes sense for our common council (legislative branch) to have its own PT clerk that can work independently of our city clerk (executive branch).  It may avoid any potential conflicts as to how much time is applied where given that the city clerk position is appointed by Kingston’s Mayor.

What are some of the concerns?

As we understand it, Ward 7 Alderwoman Maryann Mills wants the council to move the $16,000 allotted amount towards an asset management ‘manager’ position.

1) To date, the City of Kingston is awaiting recommendations from Barton and Loguidice, LLC, the consultant hired to provide the city with an asset management gap assessment several years ago. In 2015, recommendations in three phases were made to move Kingston toward adopting a citywide asset management software system. Long term maintenance and sustainability may be part of phase three, which could give the city a better understanding of the role an asset management ‘manager’ could play, including their qualifications and pay.  Some say that without this critical information, making any determinations on what and how to fund this position is premature.

2) There are also other key variables that would come into play, such as a grant that was written to cover a fleet manager position and that would manage all vehicles in the city. Kingston should learn if they have secured this grant soon and if so, the position might reduce the responsibilities of a future asset manager.

Historically, Kingston’s Corporation Council has been a part-time position, allowing those appointments to work for the City of Kingston while also maintaining a private practice. Although at a glance, none of which is reflected in Kingston’s charter.

1) Kingston’s Corporation Council is another appointment made by the mayor, serving at his/her pleasure. In the charter, it states that: “The Corporation Counsel shall be the primary legal advisor to the Mayor, Common Council and of all commissions, departments and other offices of the city. The Corporation Counsel shall conduct, supervise or monitor, as required, the prosecution and defense of all actions or proceedings brought by or against the city or by or against any of its officers in their official capacity and appeal from all such orders, decisions and judgments as he or she deems advisable.”

That’s a pretty large list of responsibilities for part-time council. As a side note, and if their position is indeed 20 hours, what happens when/if they have not choice but to go over their allotment of time?

2) Some believe that it isn’t realistic or fair to expect corporation council’s full attention to city matters when they are also being pulled by a necessary private practice.  Others suggest that in addition, maintaining both private and public work in tandem could open up the possibility of conflicts of interest (especially in a small city such as Kingston).

We support the 2017 City of Kingston Municipal Budget.

We appreciate the mayor, common council, all Kingston city departments and citizens for their hard work since the summer to craft such an exemplary budget for Kingston. Their efforts deserve our wholehearted support.  We encourage citizens to sign-up to speak tonight at Kingston City Hall (420 Broadway, Council Chambers at 7:30 pm) in favor of passing the 2017 City of Kingston municipal budget through council. In doing so, we are placing our best foot forward as we go into the new year.