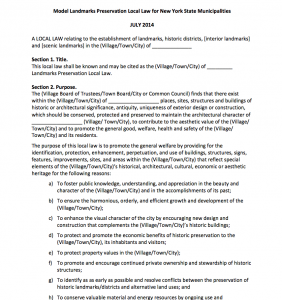 Last night, approximately 60 people attended the public educational forum “Historic Preservation in the City of Kingston: Re-thinking the Review Process” presented by KingstonCitizens.org in partnership with the City of Kingston and Friends of Historic Kingston. A good mix of the public, elected and appointed officials, City of Kingston staff and not-for-profit organizations were all present. So that more of our community can participate, we had the event filmed thanks to The Kingston News

In addition, rather than merging commissions, we encourage the council to pursue the concept of a ‘coordinated review’ (and seek out models) as well as to map out the current process for projects to contemplate whether or not a different sequence of steps could improve its efficiency.

Kingston’s Common Council Laws and Rules Committee meets next on Wednesday, May 16th at 6:30 pm in Conference Room #1 (top floor) at Kingston City Hall located at 420 Broadway in Kingston.

Committee meetings are the council’s monthly ‘business meetings’. Although the public is always invited to attend, public comment isn’t always available. If you’d like to be placed on the agenda, you can reach out to the council committee board chair in advance to make that request.

To submit comments and/or suggestions regarding the current legislation, please send to Ward 9 Alderwoman Andrea Shaut at:  ward9@kingston-ny.gov

CoK HLPC Comments: Draft Legislation on the Merging of the HLPC and HAC 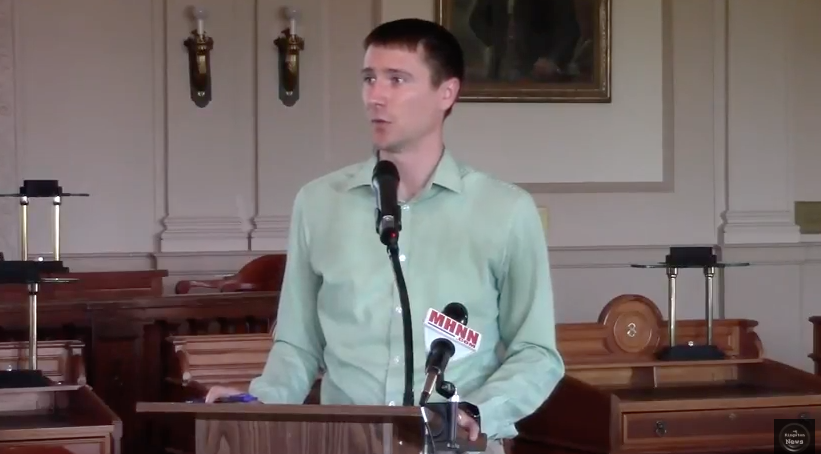 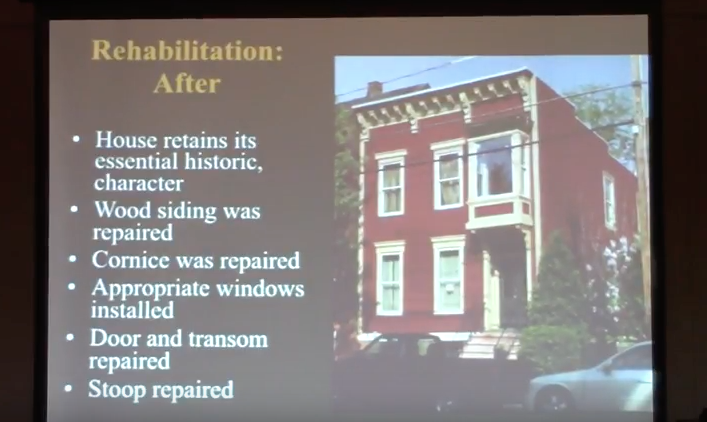 A: Marissa Marvelli
“No major projects right now.  We do have big projects coming in the future, such as the Kingstonian in Uptown.”

A: Hayes Clement
“Projects that come in front of commissions are ‘run of the mill’ issues.  Heritage Area recently helped with a coordinated SEQR review process (Hutton Brickyard). The HAC is charged to look at any project along the Rondout to meet the criteria of the Waterfront revitalization plan.”

A: Linda Mackey
“As long as the ordinance is clear when a project comes in, and the commissions meet the qualifications for Certified Local Government (CLG). We will work with the City to accomplish that.”

20:12 – 27:30
Q: “With an influx of investors buying up properties fast in Kingston, how can the preservation committees interface with mayor and city council to moderate that about what’s good for Kingston?”

A: Mayor Steve Noble
“We need single family homes, but we need condos and we need to be a city who can do that.  We have 200 vacant buildings in the city literally rotting.  We see people buying those buildings. It’s important to have processes in place….working to assure that as we get some of these vacant buildings back into life again, what is the life that that building turns into? Some of the…codes are in place, and people are starting to come.  What we need to do, we as neighbors, is to educat…we’re creating a Land Bank in the city to get buildings into the hands of stable NFP organizations for affordable home ownership but it’s a community effort. This is one way to solve the problem of people not being displaced.”

A: Marissa Marvelli
“Our Midtown study survey to make recommendations for new districts will be done soon. Our program is only as strong as the communities input. Please come to our meetings and bring your ideas.  that’s the nice thing about having a HLPC.  People come to us who don’t know the story of Kingston and we get to have a conversation. “This is why your building is important, and your neighbors.” It happens at landmarks commissions.”

27:31 – 32:43
Q: (Mayor Steve Noble):  “As properties are identified as a landmarks, to bring them up to the standards to today’s Historic Preservation requirements can be expensive. In Kingston, people with money buying these historic houses raise the property values tremendously.  Because we have a housing stock of historic house, how do we provide access for all of those moderate/ low-income individuals? It’s a struggle that we have and may lead to gentrification if only some kinds of people can afford these houses.”

A: Erin Tobin
“In many communities, there are vacant buildings and no one investing in them. Any investment requires the Low-Income Housing Tax Credit and the Historic Preservation Tax Credit. You might contrast that with the only other analogy in NYS would be Brooklyn or NYC, where people are moving into neighborhoods that have lower property values and raising them. I don’t know if that’s Historic preservations fault, necessarily….one can have flexibility in approach….you can find ways to make that more affordable. I can’t underscore the importance of the Historic Preservation Tax Credit that we have in NYS….for people investing in historic homes. It is a rebate, at or below $60k that provides initial money in.  Communities can strategize to find ways to turn it into a loan, so the homeowner doesn’t have to put that money up front, or most of it…there are land banks doing that…I can’t say that I’ve seen a big issue with preservation causing gentrification. If anything, I’m seeing that in areas where there are preservation standards investors are using the low-income housing credit as a tool to use as an incentive.”

A: Hayes Clement
“Beyond the Historic Preservation Tax Credits, Kingston has a practice of using ‘partial’ assessments….if a building is brought back.  I don’t think most people know that.”

A: Mayor Noble
” …our law currently is the model law, and we appreciate the Preservation League refreshing the model law.  this discussion is wanting to have a ‘one stop shop’ for our city…my goal with this was to take what’s working now…and help streamline the process. I agree, if there are things to do to strengthen our language it’s something we should look at….the new Preservation Model Law may be a little more specific…we want to make sure we’re not shifting and changing those types of materials and compositions while we’re in the middle of lawsuits…so we have to be careful. What I’m interested in doing is being able to have one heritage/historic board in our community to work with community and the board to ask how can we do it better.”

A: Marissa Marvelli
“Our existing ordinance might have followed the model law template from years prior, but it has been modified numerous times since them….what you see today is inconsistent and the language is not to the standards of current Historic Preservation practices. Our past challenging decisions was due to there being a lack of clarity in our ordinance and procedure.  We met with the Mayor to talk about the goals and progress the commission has been making, and our desire to talk about model law and see how we can use it as a basis of our existing ordinance.  We made it clear at that time that we wanted to be a part of that conversation. When the corporation counsel introduced the amendments, we were a little taken aback because it was our understanding that we would be a part of that process….50 years ago during the creation of the original landmarks law and commission, the effort of drafting that ordinance was a collaboration between the Laws and Rules committee and the landmarks preservation commission. The current amendment didn’t have the Preservation Commission’s input. It was done by the corporation council’s office. We saw (the language) at the same time that the members of the Laws and Rules committee members saw it (in April).”

A: Linda Mackey
“SHPO has (recently) been in discussion with the commission and were made aware of the proposed merging. We are starting those discussions with the Mayor, corporation counsel and commission and sending official comments or big picture comments. Once we have the most up-to-date version of the draft we’ll provide detail comments with that ordinance to keep with model law and make revisions…and working with the city throughout this process. We do want to make sure that while it’s ok to merge the commissions, we don’t want to miss the opportunity to strengthen the law and provide clarity. The law is the road map for the commission, for property owners, it basically explains the process….we want to make sure it’s clear as there can be multiple interpretations and when working with more complicated projects, you want to be sure of that clarity.”

39:40 – 46:29
Q: “It was said that the HLPC jurisdiction is quasi-judicial. What’s the basis of that comment?  Also, for a city the size of Kingston, I would wonder whether it’s worth having input from an outside state agency to influence its local laws?”

A: Marissa Marvelli
“NY is a home rule state, municipalities get to write their own laws based on state standards.”

A: Linda Mackey
“If a municipality is a CLG, it’s the municipalities decision as to how they craft their legislation. If not in keeping with CLG standards, that would be grounds of de-certification because it’s a program that we administor….in working with other municipal boards, we do want to know how things function…we do work with that model law developed by us, Preservation League and Department of State, but it’s up to the municipalities to decide for themselves. We tell them what’s required for the CLG program, but it’s the local municipality that does administer the ordinance.”

A: Erin Tobin
“The CLG program is offered to communities as a benefit.  It’s as though you apply for a grant, and the grant has requirements. because you’re opting into that grant you have to follow the rules. CLG is meant to be a resource, there is no real benefit to the state to have more CLG’s. This is a resource for communities with practices, and municipalities can take what we’ve put together and adopt it for your own needs. It’s a skeleton framework and you to choose within that. If communities choose to participate in the CLG program, they receive the benefits that have been described to you for that program.”

46:30 – 49:12
Q: “I see the land bank as a marvelous opportunity for the community….I am familiar with programs from another state, where they have taken vacant structures, fixed them up, rented them out, taken half of the rent that the new tenants paid, used that as a down payment to bring a neighborhood back to life so it’s affordable to folks in a city like Kingston. Is that one of the programs that the city of Kingston have in mind, and from folks on the state level, have you seen this elsewhere in NYS?

A: Mayor Noble
“We just received state approval as a certified land bank…opening up a  board application process. That board of advisors will help us step up our programs. At this time, everything is on the table. If anyone is interested in being placed on the board, please call my office and I’ll connect you to with Brenna Robinson who will lead our Land Bank effort in the City. We’ve seen it work well in Newburgh…in Syracuse, Albany and other places that are successful and we hope to be too.”