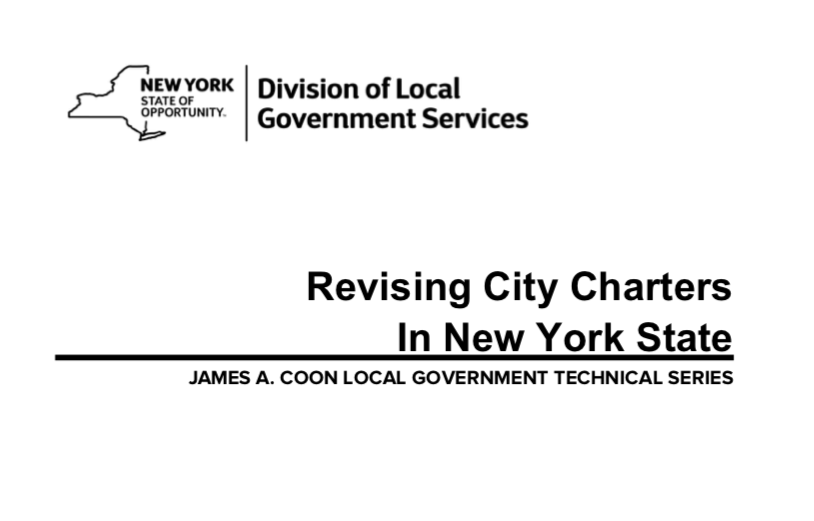 “Education is key, but every person has a different learning technique that works for them. What I would like to discuss today are some ideas on the best approach to educate not only ourselves, but the public, as we move forward with this discussion. This document is important; therefore, it is crucial we take our time and do it right.”

You can review the video that we captured thanks to Clark Richters of The Kingston News.  Brought to you by KingstonCitizens.org

How Did This Come About?

Charter revision and reform has been a topic of conversation for many years.   Recently, Ward 9 Alderwoman Andrea Shaut, concerned about matters of good government, chose to bring a Charter Revision discussion forward.

In the Department of State local government technical series “Revising City Charters in New York State”,  it says on page one of the document, “Why should cities undertake charter revision? There are several reasons, generally stemming from the fact that a charter affects everything the city government does. It provides the basis for most municipal regulatory functions and for the delivery of municipal services. An obsolete charter can be responsible for many municipal problems. If it contains provisions which are unworkable under current conditions, municipal officials may have to make a difficult choice between being responsible for inferior service delivery or inviting legal challenge for deliberate, albeit well-meaning, deviation from the law. Until such provisions are eliminated, the most competent officials will be unable to carry out their responsibilities both efficiently and legally.”

In May, Andrea submitted a letter to Council President James Noble, requesting that Charter Reform be placed on the council’s Laws and Rules Committee for June:

I would like to request that the item “Kingston Charter Revision Task Force” be placed on the agenda for the next Laws and Rules Committee agenda in June.

According to the NY Department of State document,”Revising City Charters in New York State’ ‘it gives an excellent explanation on revising city charters: “What is a city charter? tt is the basic document that defines the organizøtion, powers, functions and essential procedures of the city government. lt is comparable to the State Constitution and the Constitution of the United States. The charter is, therefore, the most important single law of ony city.

Why should cities undertake charter revision? There are several reasons, generally stemming from the fact thot o chørter affects everything the city government does. tt provides the basis for most municipal regulatory functions and for the delivery of municipal services. An obsolete charter can be responsible for many municipal problems. lf it contains provisions which are unworkable under current conditions, municipal officials may have to make a difficult choice between being responsible for inferior service delivery or inviting legal chøllenge for deliberate, albeit well-meaning, deviation from the law. Until such provisions are eliminated, the most competent officiøls will be unable to carry out their responsibilities both eÍficiently and legally. Even though a chorter moy not be so obsolete as to present dilemmas of conscience, revision may well løy the basis for improved governmental operøtions. A good charter should provide a clear distribution of the powers of city government and clear descriptions of the duties and powers of municipøl officials.”

I look forward to introducing this important initiative to my council colleagues.

A Charter Discussion with Council Members.

“What would help you understand the charter, and charter revision better?” said Andrea, followed by a list of ideas for council members to consider:

Back in July of 2017, KingstonCitizens.org brought Dr. Gerald Benjamin of The Benjamin Center to Kingston to discuss charter revision and the City of Kingston.  Dr. Benjamin has consulted communities in the region with their charter efforts, including being involved in developing Ulster County’s first charter (adopted in 2006).  Jennifer Schwartz Berky, who moderated the discussion for KingstonCitizens.org and is the former Deputy Planner for the Ulster County Planning Department, was also instrumental in crafting the county’s first charter.

Dr. Benjamin did a general overview of Kingston’s charter, going page by page to illustrate the changes that could be made to improve our “law of the land”.

Going further back,  in 2013, we discovered commentary from Tom Benton, one of the involved citizens in reforming Kingston’s charter in 1993/1994.  Reading that, and meeting with him, too – helped to understand its origin (and the mysterious lack of good checks and balances between the executive and legislative branches of government):

READ  “How Kingston Got Its Strong Mayor Form of Government”

It’s terrific for Kingston that our council wants to address this important document through education and good public outreach.  To do it properly will take some time. It makes sense that the council – as our policy and lawmakers – make certain that the charter that govern us is properly written and up-to-date.