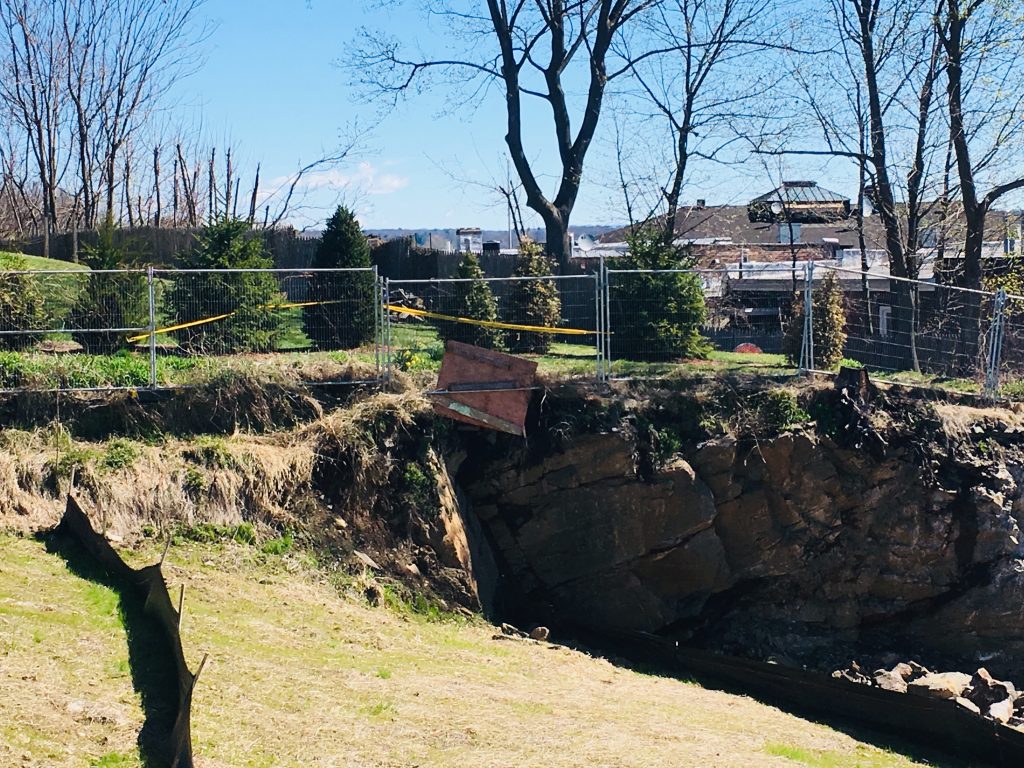 The photo reveals the ICC property looking North from Abeel street, where the developers appear to use “plywood” to mitigate damage.

After the ground gave way for the neighbors 7-year-old son to fall into the Irish Cultural Center’s project pit, residents living next door worried that their home property line would further erode with that night’s torrential downpour. Erosion has been an issue since last summer due to the apparent poor excavation practices and lack of oversight of the project.

As far as we are aware, the project does not have a stormwater plan in place to mitigate the impacts of rain storms that have compromised the site and Company Hill Path, a significant historic resource adjacent to the surrounding  properties.

According to the New York State Department of Environmental Conservation’s website, the overall annual precipitation in New York has increased with “year to year (and multiyear) variability becoming more pronounced…the amount of precipitation falling in very heavy events (downpours)” —like the one that occurred last weekend—“have increased by 70% across the northeastern United States” due to climate change.

The project, located in Kingston’s Rondout Historic District, was determined a Negative Declaration (Neg Dec) in its SEQR process by the Kingston Planning Board, even after years of effort by dozens of citizens highlighting the potential significant environmental impacts, and there were many.

READ
KingstonCitizens.org on the ICC Process

The erroneous Neg Dec SEQR determination for the Irish Cultural Center project is one of the key reasons why KingstonCitizens.org has gotten involved in the proposed Kingstonian project SEQR process in Uptown Kingston from the very start. It is no secret to the executive branch that we lack faith in the Kingston Planning Department. Until our community has a professional urban planner to help direct growth in our historic city, it should be expected that our scrutiny of the Planning Department will continue.

Video footage provided by The Kingston News. Brought to you by KingstonCitizens.org

My name is Hillary Harvey, and I live adjacent to the Irish Cultural Center on Abeel Street.

On Saturday, I was gardening in my yard when my 7-year-old son walked over to the construction fencing that the Irish Cultural Center put up on our shared property line.  He stood there for just a moment before the ground dropped out from underneath him.  Luckily, he was able to catch himself and scramble back up.  It’s about a 15 foot drop down to the ICC’s pit, so my son could have gotten really hurt.  Obviously, we are very upset.  We’ve submitted photos of the hole to Planning, Engineering, Building Safety, and our elected officials.

Without any retaining walls, terracing that conforms to OSHA standards, or stabilized fencing on our side of the ICC’s property, my property is collapsing.  The ICC does no regular maintenance at the site.  The silt fencing sags, the neighboring properties erode, and they haven’t been back to do any work since the City Engineer cited them for violations last summer and forced them to add protections for 42 Abeel Street last summer/fall.  They were there today to assess and patch the damage to my property with plywood and rocks.  And Ed Norman of DPW has been in touch throughout the day to help us, for which I’m very grateful.

At your December 17th, 2018 meeting, City Engineer John Shulteis told you: The plan is adequate if it is correctly maintained and implemented, and any of these measures are temporary measures with lifetimes measured in months.  For example, a silt fence doesn’t last for years and years.  It has a tendency to fall down.  You can’t just install it and forget about it.

After that, at your February meeting, despite our pleas for a positive declaration in SEQR, you determined that the ICC would have no environmental impact on our neighborhood.

I’m here to remind you that you decided that the Irish Cultural Center would have no environmental impact on the community.  Even after they let their site plan approval lapse this year, and the City Engineer cited them with violations which caused degradation to the City property at Company Hill Path and to my neighbors’ house at 42 Abeel Street, you decided that you did not need to re-evaluate any of your determinations on this application, including your SEQR review.

This site needs retaining walls and permanent, stabilized fencing.  The construction fencing is not inserted into the ground, but weighted, and now floating in places.  And it needs maintenance, which the ICC has not been doing.

Now I understand from things you’ve said at your meetings that there’s the impression that I deserve whatever I get because I bought this property after the ICC bought theirs.  And I understand that some of you have personal connections to the project applicants, as members of the organization, your parents donate to this organization, and you work for the city who defends this project whole heartedly.

But I am a mother, a home owner, and a tax payer in this city for the past decade.  And the Planning Board is tasked with ensuring the safety and welfare of city residents.  I want to remind you that your decisions have an impact on the safety of my children.  And I want to know what are you going to do to protect my children?

My name is Owen Harvey, and I live next to the Irish Cultural Center Pit on Abeel Street.

It is difficult for me to find a place for forgiveness. It is difficult to forgive what the City, this Board has permitted to happen to my son. I am angry and I am frustrated by this situation your actions led to occurring. The safety of my children is paramount and what happened the other day is inexcusable.

Repeatedly I came before this board as a father and asked you to take into consideration the safety of the young children who live at the adjacent property to the Irish Cultural Center- and you ignored that request. Now again the city is being forced to react to your poor oversight.

Your unwillingness to understand the potential harm this project could cause has now jeopardized the safety of my young children – and this is before any actual building has begun.

Who knows what other negative aspects from this project the city will need to continuously respond to because of this board’s disinterest in the serious concerns raised during the review process.

We are asked to trust that this board is an advocate for the safety and welfare of our community- but now I know you are not even capable of protecting a seven year-old child whose only fault was playing in his backyard.

So today, I simply want you to know that when you are rushing out of the movie theatre with your own young children, or shopping at the market, or out in the Rondout neighborhood with your family or friends, or maybe even Uptown celebrating at an event, and you happen to see me or Hillary with our son, know that he is the little boy the actions you put in place almost killed on Saturday.

His name is Ignatius, and those who love him call him Iggy.