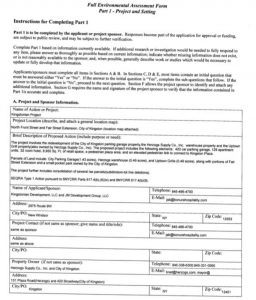 With the recent positive changes to the Lincoln Park Grid Support Center project, we can turn our attention to the Kingstonian Project and its SEQR process (State Environmental Quality Review) which is just getting underway.    KingstonCitizens.org is in the midst of organizing a new coalition of partners for this effort.  Our goal is to follow SEQR step by step and support the public and our elected and appointed officials to assure a clear, efficient and transparent process.

A Brief Description of the Kingstonian Project.

The parcels of land include “City Parking Garage (1.43 acres), Herzog’s Warehouse (0.49 acres), and Uptown Grill (0.49 acres) along with portions of Fair Street Extension and a small pocket park owned by the City of Kingston.  The project further includes consolidation of several tax parcels (subdivision-lot line deletions)”

The City of Kingston Planning Board as Lead Agency.

On January 22nd, the City of Kingston’s Planning Board passed a resolution confirming the Kingstonian Project being a Type 1 Action in SEQR with a Coordinated Review and asking to be Lead Agency for the project.  The resolution was acknowledged by the Clerk’s office on 1/24 that starts the 30-day clock for all Involved Agencies to approve the request (more on that below).

What is a Type 1 Action and Coordinated Review?

A Type 1 action means “an action or class of actions that is more likely to have a significant adverse impact on the environment than other actions or classes of actions.” Because of which, a full Environmental Assessment Form (EAF) must be submitted to the Lead Agency once determined, and the Lead Agency must always coordinate the SEQR review process with other involved agencies.

The applicant has submitted Part 1 of its full EAF where it was declared up front that the project would be a Type 1 Action in SEQR.  A coordinated review is required for all Type 1 Actions. The involved agency “initially receiving an application for approval” (the Kingston Planning Board) “circulates the completed Part 1 of the full EAF and any other information supplied by the applicant to the other involved agencies.”

There’s more to this that we can get into later on and as we move along, though it’s worth noting in this case that the Lead Agency, after reviewing the EAF,  may request an Environmental Impact Statement (EIS) “after review of application documentation related to the proposed action (in the EAF) and decides that the action as proposed is likely to cause at least one significant adverse impact to the environment.”

What is Lead Agency in SEQR?

The purpose of having a Lead Agency is to “coordinate the SEQR process from start to finish so that when an action is to be carried out, funded or approved by two or more agencies, a single integrated environmental review is conducted.”  Also important is that the Lead Agency “is responsible for making key SEQR determinations during the review process.”  In other words, they control the process.

In SEQR, an agency is Involved when the determination is made that “the agency has or will have a discretionary decision to make regarding some aspect of the action” involving the project.   In the case of the Kingstonian Project, there are ten identified Involved Agencies and they are:

It’s appropriate that the Kingston Planning Board be the Lead Agency of SEQR for the Kingstonian Project.   Although the Kingston Common Council as an Involved Agency could also request the role,  it’s in the public’s best interest that they remain free to advocate for their constituents, as the Lead Agency must remain impartial.

Next up:   Lead Agency to Determine a Positive or Negative Declaration in SEQR for the Kingstonian Project, where the public will have a chance to request a Pos Dec within a 20 day window.  More shortly.