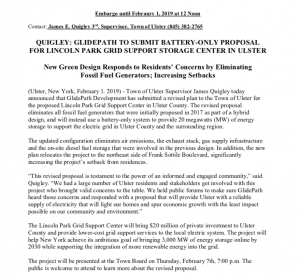 READ: GlidePath’s Letter to the Town of Ulster with their new plans.

A controversial proposed power plant in the Town of Ulster will be re-sited and re-born as a renewable energy project, thanks to a partnership among many community groups and local governments.  Led by KingstonCitizens.org they include TownOfUlsterCitizens.org, Scenic Hudson, Citizens For Local Power, CAPP-NY, Catskill Mountainkeeper, Food and Water Watch, Hudson River Sloop Clearwater, Kingston Land Trust, Riverkeeper, Sierra Club of the Mid-Hudson Valley, Sustainable Hudson Valley and the Woodstock Land Conservancy.  The coalition helped to guide the public through each step of the State Environmental Review Process (SEQR) throughout Glidepath’s Lincoln Park gas-fired power plant proposed in the Town of Ulster. Today, the partners respond to and celebrate the good news announced by the Town of Ulster:

“I couldn’t be more grateful to our group of dedicated coalition partners for their collaborative efforts to transform a fossil fuel project into a renewable one. They worked tirelessly to provide support to not only the public but also our elected and appointed officials for the past 16 months. The innovative and forward thinking approach advocated by our elected officials – and especially our County Executive Mike Hein – will benefit the Town of Ulster and County for years to come and, more broadly, communities across New York State who can implement similar localized collaborative efforts.”

“The announcement by GlidePath to withdraw its original plan and replace it with a battery storage facility is welcome news to our town’s citizens, this fracked-gas and diesel power plant would have doubled the Town of Ulster’s carbon footprint if the plant became operational, but their new proposal for a storage-only facility is a way to keep our local environment clean and preserve generated power which would otherwise be lost to the grid. GlidePath has considerable experience with battery-storage plants, but they had no experience with burning gas and diesel for electricity.  This project is more in line with the values of Ulster County’s commitment to renewable initiatives. TownOfUlsterCitizens.org participated in the SEQR process for over a year and suggested a battery-storage facility in another part of town as a viable alternative to the fossil-fuel plant. Understanding all the details of this battery storage facility, we fully support GlidePath’s revised project proposal.”

“Today’s announcement that Glidepath will be withdrawing its plans for a gas-fired power plant and instead focusing on clean, renewable power generation is great news for Ulster and the entire Hudson Valley. Moving away from polluting fossil fuel plants that contribute to climate change and investing in renewable energy is a win-win proposition. This victory is a testament to the power of citizen engagement–informed and determined community members led the charge in fighting this project, and won. We look forward to reviewing the details of GlidePath’s new proposal.”

“We welcome GlidePath’s decision to withdraw its proposal for a gas-and diesel-fired ‘grid support system’ in the town of Ulster and to propose, in its place, an all-renewables project. The move is in keeping with GlidePath’s history, since in the past the company has built only projects that combine battery storage with renewables – a potentially game-changing development that makes it possible to use the stored electricity to even out the variation in renewable electricity generation and to decrease the need for expensive build-outs of the electrical grid. The decision is a good one for the Mid-Hudson Valley, thanks to the vigilance and vision of local citizen groups, environmentalists, and elected officials, and to the wisdom of the company in withdrawing a bad proposal and returning to its roots.”

Susan H. Gillespie
President of the Board
Citizens for Local Power

“This new proposal shows the power of engaged citizens to change the shape of a conversation, an environmental review, a proposed project, and indeed, our future. Every community should be seeking desirable projects from companies capable of providing renewable energy generation and storage, and every community should mount opposition to fossil fuel projects that pose unacceptable risks to our air and water. We look forward to reviewing this new proposal from GlidePath, which starts out on a much better foot and offers potential benefits to our local towns and region, while potentially strengthening our entire energy system.”

“CAPPNY sees this as a great day for people who are committed to moving away from dependence on fossil fuel.  The change in GlidePath’s plans shows the power of ordinary people and what can be accomplished by the determination and collective action of  people standing up and working for a safe and just community. This is an important step toward complete reliance on renewable energy.”

“This is a critical victory not just for the guardians of air and water, health and safety in the Town of Ulster and Hudson Valley, but for climate defenders and water protectors across our state and region. This exercise of people power is a signal pointing to the Green New Deal to come. No new fossil fuel infrastructure, period!”

“Thanks to the work of dedicated community members, community groups, and environmental organizations GlidePath understands that Ulster County, and New York State need a renewable energy future now. Riverkeeper is encouraged that Glide Path is withdrawing its fossil fuel project, in favor of a renewable energy and battery storage proposal. We look forward to seeing the details and ensuring that any new project does not exacerbate climate change, or threaten public health or the Hudson River.”

“Democracy works, and technology is changing so fast that it makes sense for all parties to be taking a fresh look at the kind of project that is cost-effective today.  We applaud the progress, and the validation that renewable power is a cost-effective investment today.”

“Members of impacted communities came out to participate in deciding the future of our energy infrastructure, and GlidePath listened. Clearwater is grateful to GlidePath for rethinking their project and shifting away from our long-standing dependence on fossil fuel to using renewable energy with storage and efficiency.  Given the recent Intergovernmental Panel on Climate Change (IPCC) report calling for ‘rapid, far-reaching and unprecedented changes in all aspects of society’ to avoid disastrous levels of global warming — we must achieve 100% renewable energy generation by 2030.’ This is a huge step in the right direction.”

“The Kingston Land Trust, as one of the coalition partners, has been a proponent of a more environmentally responsible operation as well as more conscientious sitting. We are so pleased to see this project moving in that direction, thanks to the work of dedicated citizens as well as a responsive company. We believe in the power of civic engagement to protect land and communities and we will continue to be active in this process as long as there is a need.”

“The Woodstock Land Conservancy commends GlidePath for listening to community concerns and stating their intention to withdraw their “Lincoln Park Grid Support Facility” application, in favor of a first in NYS-facility providing direct battery back-up, storage and grid support. We hope that the new proposal is a demonstration of Ulster County and New York State’s environmental and renewable energy and climate change leadership.  We owe great thanks to our coalition partners for their committed advocacy, and to County Executive Mike Hein for pursuing a thorough examination of the impacts of GlidePath’s initial proposal and pushing for a non-fossil fuel based alternative that does not contribute more greenhouse gas emissions, nor negatively impact the neighborhoods which surround it. And we additionally express our gratitude for the responsiveness of Supervisor Quigley and the Town of Ulster, for their work in facilitating this.”

“The community has struck a blow against climate change by blocking GlidePath’s proposed fracked gas power plant.  New York needs to move off fossil fuels and rapidly shift to 100 percent renewable energy, and the company’s decision points us in the right direction. Governor Cuomo should take heed of this smart move and use his own authority to stop all new fossil fuel projects.”