For those who were not around during the most recent renovation of the Pike Plan (2008 – 2011 -ish), I recall the following article written by Steve Hopkins who at the time was the current (or outgoing) editor of the Kingston Times.   He did a great job capturing the essence of the feeling then.

With the Pike Plan being discussed by the council and, a recent Kingston Times poll, it seems like a good time to share some of the information we have from back then to provide some historical context.

POLL: SHOULD THE CANOPIES IN UPTOWN KINGSTON BE TAKEN DOWN?

“As deputy director of planning for the county at that time,” says Jennifer Schwartz Berky, a Kingston city resident, “the building owners came to me to get advice about the canopies before Norman Mintz came to consult for RUPCO. They were concerned about the costs (they pay a special assessment), the leaks caused by the junctions with their buildings, and the lack of visibility for their businesses because of the canopy. I contacted the National Trust for Historic Preservation, and their experts told me — in no uncertain terms — that they consider these 60s and 70s canopies across the country to be, by and large, detrimental to the functioning of commercial districts. What began as a response to competition from malls ended up as blight, and they expressed surprise that we hadn’t taken ours down yet, citing numerous examples of business districts that revitalized in part BECAUSE they took theirs down. Norman Mintz understood this, and we still see one another occasionally as professional planning and urban design conferences. He was disappointed that his advice wasn’t taken. In the late 19th century, the design of the 20-and 25-foot span of storefront, with large plate glass windows, often with recessed entrances to add more surface area, was a costly innovation that brought light into the spaces and allowed for the maximum merchandising display. The canopies obscure this feature of the Victorian commercial districts in terms of a very significant aspect of their design. Look around at any vibrant commercial district: their storefronts and facades are critical to their character and identity. They are easier to remember, brand themselves, and can be found by visitors. It is a shame that we have to rehash this debate.”

Given what it would cost to fix the rehabbed Pike Plan – only a decade old and in many places already falling apart- and the costs of removing the canopies for the buildings and streetscapes to be restored to their original glory – I personally hope that the city will find its way to the latter.

Thanks to Steve Hopkins for allowing us to repost his article here. 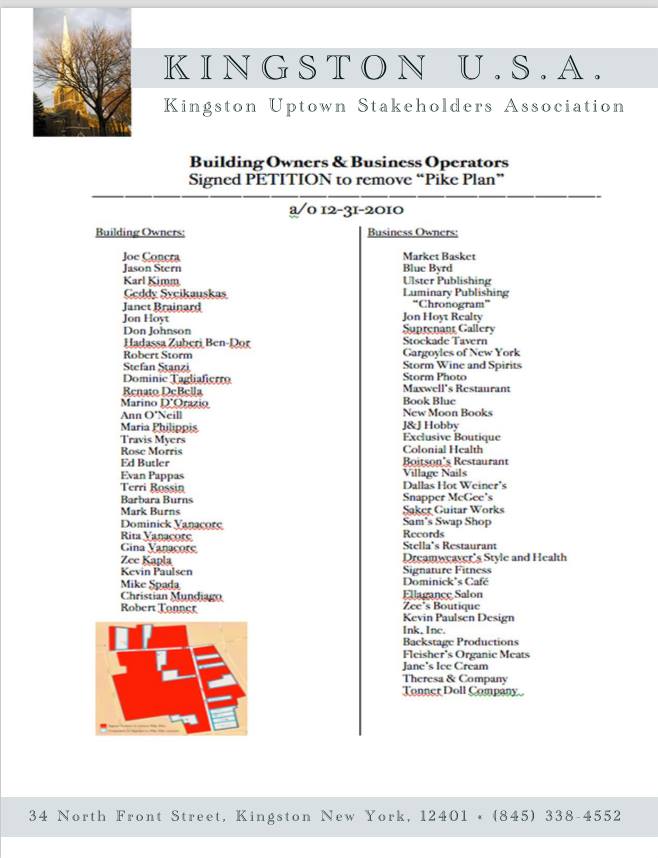 By Steve Hopkins
(This article is a repost that was originally in the Hudson Valley Chronic, Vol. 2, No.3, April-May 2009)