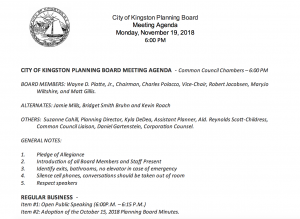 At tonight’s City of Kingston Planning Board meeting, there are three topics that we are following. You can view them below to learn what they are and suggestions for what the public can do.

The meeting will be held at Kingston City Hall (420 Broadway) 3rd Floor, Council Chambers. For items without a public hearing, please arrive early to sign-up to speak. Public comment occurs at the top of the planning board meeting.  Tonight’s meeting will be filmed by The Kingston News thanks to KingstonCitizens.org

When this item came up last month at the October Planning Board meeting,  the Board “voted unanimously to table the application and refer it to the Ulster County Planning Board. Staff will work with the applicants on preparation of visual simulations as well as a balloon test to show the height of the tower. The public hearing will remain open until the November Planning Board meeting.”  Ward 7 Alderman Patrick O’Reilly spoke during public comment (O’Reilly represents Ward 7 where the communication tower is being proposed).  According to last month’s minutes, O’Reilly was  “interested in knowing how much radiation is emitted from these types of towers. He said that there are already cell towers on top of the neighboring water tower and that this would be in addition to those. Also, he is interested in the visual of the tower and how it would look from the surrounding neighborhoods. He said that there are beautiful views in that area and he would like to know how these views would be affected.”

Of note, the location of this tower is in close proximity to one of Kingston’s public housing complexes.

Review the minutes from October’s meeting VIEW (item #8).   The item was tabled and sent to the Ulster County Planning Board for review (we are currently requesting the outcome of their November meeting. More information shortly). The need for further study can be presumed (balloon tests, radiation concerns, generator noise, etc.).  Citizens can inquire during tonight’s public hearing whether or not this project has the criteria to be determined a Type 1 Action in SEQR.  A Type I action carries with it the “presumption that it is likely to have a significant adverse impact on the environment and may require an EIS”.

According to Grow the R/T Responsibly, “The Irish Cultural Center of the Hudson Valley (ICCHV) is proposed to be a 16,000sf  three-story “community center” with a pub, outdoor seating, roof garden, and 171-seat theater on .43 acre parcel at 32 Abeel Street with 8 parking spots.  Since meetings in 2012, neighbors have brought up concerns about parking, traffic, and the building size; more emphatically since 2015 after the ICCHV allowed its first site plan approval to lapse and submitted a new application with a bigger design and scale.  After 2 ½ years, it gained approval for its new application.  Then, the ICCHV committed multiple violations in its first stages of construction, had a hard time securing a $200,000 performance bond required by the City, and allowed its site plan approval to lapse a second time.  Tonight, the ICCHV seeks site plan approval of its project for the third time.

The ICCHV bought their property at 32 Abeel Street with $125,000 grant from Assemblyman Kevin Cahill.  They are seeking $2 million in public funding through Assemblyman Kevin Cahill and Senator George Amedore.  Reports of the project cost have been estimated in the press at between $3-8 million.  The use of public money for this project should require the process to be fair and transparent.”

This is not a public hearing on the project as the ICCHV has not yet submitted a new application.  This is a public hearing on what the Planning Board’s process should be on this third application for site plan approval by the ICCHV.    Citizens can ask that the Planning Board re-open the SEQR review, and for it to be more comprehensive in light of the adverse impacts already generated by the excavation work performed by ICCHV in May 2018. 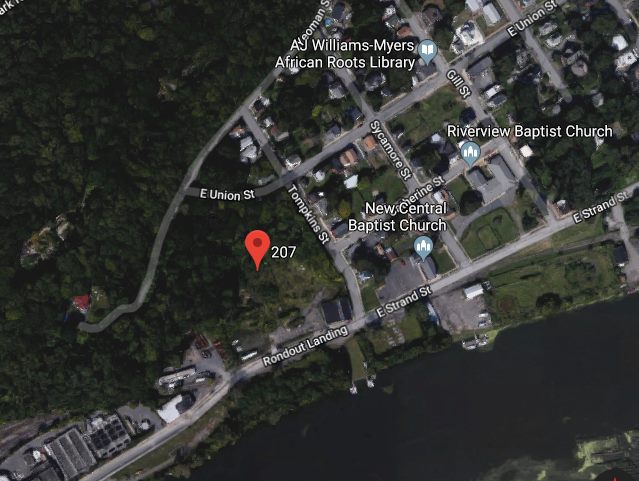 In the paper over the weekend, the public came to know of a proposal for Kingston’s Rondout dubbed “Super Garage” by Robert Ianucci (Historic Kingston Waterfront LLC).   The project location is indicated by the red arrow in the satellite map above

Tonight is the first time the developer will give a public presentation. It is not a public hearing. Although I expect there to be plenty of items to address going forward, I would advise citizens to observe tonight’s presentation first before making comments for or against the ‘Super Garage’ project.

If you do wish to comment, you can sign-up to speak at the top of the planning board meeting.  According to the agenda, there is a 15 minute comment period starting at 6 pm so hopefully, the Planning Board will grant more time.  Prepare comments to be 2 minutes or less in the case that there are many speakers.

OF NOTE: The proposed project is not located in a Historic District even though the project would require the potential demolition of historic resources (Newark Lime and Cement Building is located on the property).  There are probably important archeological objects on or near the site as well.

During the last major hurricane incident (Irene) the Rondout Creek crossed the street and as I understand it, flooded the basement level of the structure.  The Heritage Area Commission does have purview over this location because of Kingston’s LWRP (Local Waterfront Revitilization Plan) that was created in the early 90’s. Although sea level rise was not addressed back then, Kingston’s Conservation Advisory Commission has been charged to look closely at that recently.

2 thoughts on “TONIGHT. Important Topics at Kingston’s Planning Board Meeting. What They Are and What You Can Do.”