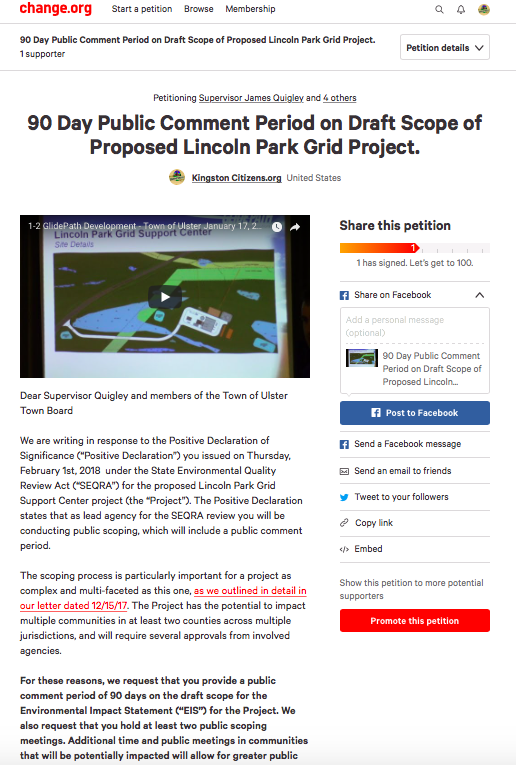 Last night (2/1), the Town of Ulster (ToU) Town Board added a late entry to their Town Board Workshop Meeting regarding the Lincoln Park Grid Support Center, a gas-fired power plant being proposed in the ToU.  As Lead Agency, the Town Board presented and passed a resolution for a Positive Declaration (pos dec) determination in SEQR, as well as proposed a public scoping session on Thursday, February 22, 2018 at 7:00pm at Town of Ulster Town Hall.

ToU citizen Laura Hartman attended the meeting last evening with several other concerned citizens. During public comment, Hartman graciously thanked the board for making a positive declaration for the proposal.

“I’d like to ask for 90 days for public input and for items like this to be listed in advance so that the public can have the chance to see (items that are of interest to them) to participate in the meetings” Listen at at 27:28

Our coalition of partners (that includes CAPP-NY, Catskill Mountainkeeper, KingstonCitizens.org, Riverkeeper, Scenic Hudson and Woodstock Land Conservancy) has been waiting for a pos dec determination.  In preparation, we created a letter that was ready to submit first thing this morning to Supervisor Quigley and the ToU Town Board requesting a 90 day public comment period with at least two public scoping meetings  given the magnitude of the proposal.

Citizens can help. Please SIGN OUR PETITION and request that the ToUTown Board as Lead Agency allow for a 90-day public comment period with at least two public scoping meetings on the Draft Scope of the Proposed Lincoln Park Grid Project

A LITTLE INSIDE BASEBALL. Connecting the dots.

A Positive Declaration is “a determination by the lead agency that an action may result in one or more significant environmental impacts and so will require the preparation of an EIS before agency decisions may be made regarding the action. The positive declaration starts the EIS process.”

A pos dec and public scoping process is a great step for our communities and county.  However, the ToU Town Board has already scheduled a public scoping meeting to occur on February 22nd without releasing the draft scoping document.

Why is that significant?

A draft scope is submitted to the Lead Agency (and in this case, the Town of Ulster) by the applicant  (GlidePath via Chasen & Company, their consultant) to release to the public.  I like to think of a draft scope document as a ‘table of contents’.  Typically, a 30 day window occurs for the public to review the document so to be sure that all items of concern for study are included.  There is no one better to do this work than the citizens who live within proximity to the project with the support of the environmental advocates who have dedicated their life’s work to the protection of the area.

All of these items end up in the scoping document and will require the applicant to pay for consultants to do the required studies. This will be a costly process for GlidePath. Given the public’s disdain for  the proposal, it will be interesting to see how far they go as a true indication of it’s profitability.

Speaking of which, while a project is undergoing the SEQR process, it cannot apply for any applicable tax incentives or grants. So that is an entirely other item that citizens will want to pay close attention to as we proceed

The ToU Town Board has already set the public scoping meeting to be 2/22 according to their agenda item without the release of the draft scope. This is problematic and indicates that they intend to release it sometime between now and the 22nd, banking on a 30 day window. This would leave the public with limited time to review and ask questions for a proposal of great magnitude.  As far as I know, this is the first peaker gas plant being proposed in Ulster County. The project plans to re-connect new gas infrastructure at a time that citizens living in Ulster County and New York State have expressed their intention to segue from fossil fuels to renewables. A natural gas peaker power plant created by a company from the Midwest most certainly doesn’t do that.