We had an informative educational panel on July 13 with Dr. Gerald Benjamin of  The Benjamin Center and Jennifer Schwartz Berky, principal of Hone Strategic and District 7 Ulster County Legislator discussing Charters and Charter Reform.

To our delight, Dr. Benjamin took the time to mark up Kingston’s current charter which we felt was most important for the public to review.  You will find his power point, frame by frame with video that is marked so that you can follow along.  The audio isn’t great, but you can still hear. We do recommend headphones.

For those who wish to also see Dr. Benjamin’s power point on Charters, click on the following link HERE where you will be taken to a KingstonCitizens.org page. Then, click on the blue hyper link and the power point will download to your computer.

We think charter reform in Kingston at this time is key in order to bring more clarity to local government.  The last time it was done was back in 1994, where the process was anything but transparent.   READ ON “How the City of Kingston Got It’s Strong Mayor Form of Government   (This post was from 2013).

“You don’t need the city’s annexation any longer because it occurred in the 19th century.”

“Elections are governed by state law, they don’t have to be described in your charter….the ‘Organization of Common Council’ should be moved to a Legislative Article. It’s interesting that your Legislative Article is so far back in your charter. It should be moved to the front….it is also strange to me that all items that have to do with your council are not all in one place.” 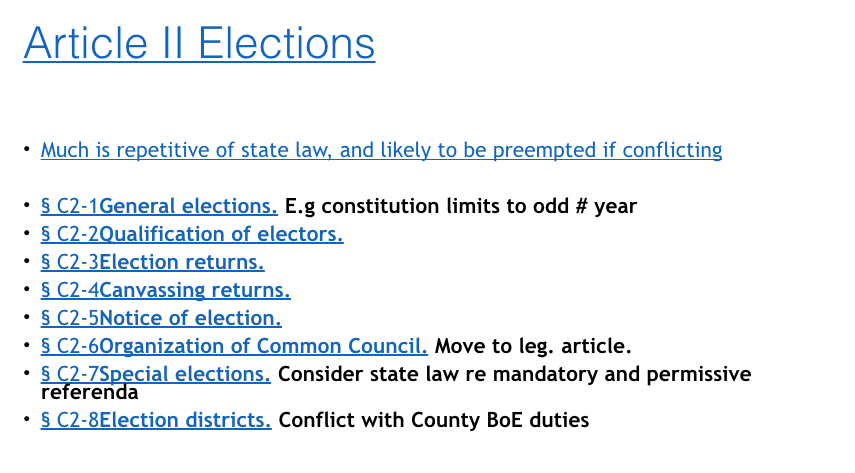 “They encourage intergovernmental relations in the Constitution. It’s not a bad thing to repeat it per se. It’s only bad if you think that’s the source of your power. It’s not.”

“You talk about the inability of an acting Mayor, but you don’t talk about how you know when someone is unable to do the job. They may not know if they are not performing.”

“…often you have a provision adopted one day, and another another day and those making the changes don’t see the contradictions or have the patience to change it or they want to get through the process.”

“There doesn’t seem to be a lot of substance for the Aldermen section….they are supposed to report misconduct. What does that mean? Someone must have been bad and no one told anyone about it….alot of law has to do with solving problems in the moment.” 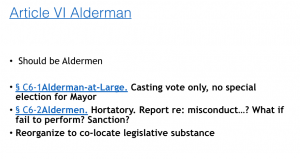 “There is a lot of detail about a few jobs. Assessor, PW and WB. Sometimes the detail can be put into code, or left out because it’s covered by state law. 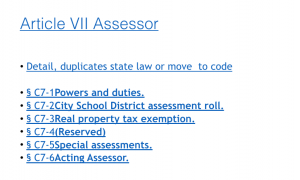 “The legislature is without staff. The ambiguity of the relationship between City Clerk and the legislature, since they are hired by the Mayor, needs to be thought through.” 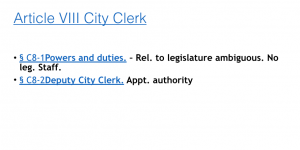 “Comptroller is an auditor so you are calling your fiscal official a comptroller but you are empowering them as a comptroller.  It’s an interesting thing that the comptroller who is thought of as an oversight officer helps to create the Kingston budget.”

“You have the separation of power system…but if the lawyer works for the Mayor but the council disagrees with the Mayor and the council needs legal advice, can they go to the person the Mayor appointed with confidence?”

“Why do you have a water board? In modern government, the integration of departments in cities suggests that this independent structure might be more of a hindrance.” 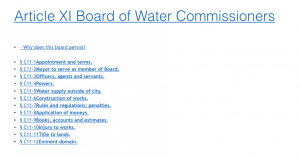 “There is probably a Fire Department provision because some are volunteer and some are paid. I don’t know why that is. It’s an interesting question.” 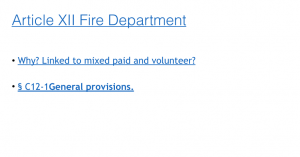 “There is a lot about the common council article that I found to be in need of attention.” 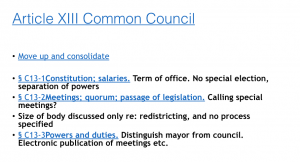 “The detail in the public works department is not necessary for a charter. One thing that happens when you create a charter change, people in government are worried about  “you’re going to try to abolish my department” or ‘”they are going to take my powers away.”  So what they do,  is take the powers and throw them in the charter and say  “look, don’t vote against the charter. You see? You’re protected.”  Historically, I know this happens alot. The detail here suggests that there was some political reason to keep the public work detail.” 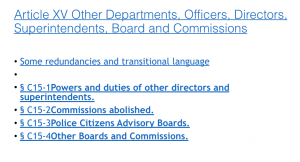 “The budget process is a distinct process…and it’s a process that is political that involves the preparation of the budget…it should be separated in the charter from tax collection.” 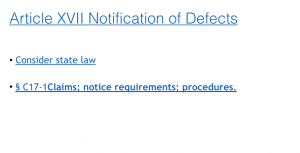 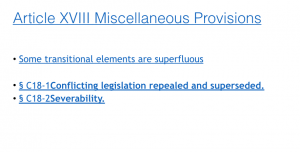 “Some ideas that I have had such an ethics provision, which are not punitive. they are directive…you don’t have a redistricting provision and you should, especially as the minority population is a significant population….periodic charter review and, training for elected officials for those coming into government without any background.”

1 thought on “A First Look at the City of Kingston’s Charter.”