Our recent educational forum “On Immigration” was focused around the Ulster County Legislature’s Resolution No. 138 “Creating A Policy To Maintain A Safe, Inclusive Government to Ensure The Protection, Order, Conduct, Safety, Health,  And Well- Being Of All Persons In Ulster County” structured around ACLU guidelines. VIEW

With guest panelists District #7 Ulster County Legislator Jennifer Schwartz Berky and Ulster County Sheriff Paul J. Van Blarcum, it was my favorite educational panel discussion so far this year, where we had the opportunity to focus on a single piece of local legislation with at times two opposing points of view.

Resolution No. 138 is important and worthy, but it doesn’t have the support it needs to pass through committee to the legislative floor. It also doesn’t have the Sheriff’s support for reasons you might not suspect.

Empowered by New York State law and the County charter, the Sheriff’s office is independent in the way of policy making and procedure (though in reviewing the county CHARTER, it does state that “the Sheriff shall have and exercise all the powers and duties heretofore or hereafter lawfully granted or imposed by the Charter, Administrative Code, local law or resolution of the County Legislature“. My interpretation is that the Legislature would have oversight in some cases). In the resolution, there are several points in the model language that the Sheriff feels would infringe upon his office.

I wish that the Ulster County Legislature would have taken its time with this, starting with a small item that they and the Sheriff’s office could agree to.  For instance, sensitivity training on immigration by all county officers was something that was brought up on Sunday by a community member.  All the while, building support both internally and externally for a Resolution as important as No. 138 to have a fighting chance.

3:04 – What empowers the work of the UC Legislature and UC Sheriff’s office?

5:50  – “Sanctuary” is a term that has come up this year, that many hadn’t thought of or even have known about before the Trump administration. What is the difference between a community, city or county that speaks of itself as a “Sanctuary” and one that is “Welcoming and Inclusive”?

JSB: “Sanctuary”  is not a legal term. It refers to the “spirit” of the statement they are making. There is a range of statements having to do with the concept to limit cooperation of government, whether we call it “sanctuary” or not.

PVB: “Sanctuary” is not a law, just a suggestion.

13:10 – The City of Kingston worked with the Kingston Police Department to craft their resolution. Given the confusion and fear currently, in being a supportive community, what might you suggest could help our County regarding this matter?

14:37 –  What is the process of the Ulster County Sheriff’s department in how it handles members of our community who are undocumented?

PVB:  People think there is no process, and there is… you are not going to be deported because you are undocumented.

16:08 –  Are you seeing any changes in how you manage immigration issues in ulster county from one administration to another?

PVB:  No. Nothing has changed since I began this work in 1976 in Ulster County.

16:25 –  On the subject of fear, there are those who speak about members of our community who are undocumented as being ‘criminals’ or ‘illegals’ that has heightened since Trump took office.

PVB:  The public doesn’t have to worry about being deported by local police agencies because they are undocumented. We will not allow members of the public to be targeted by their heritage.

22:50: The PEW center states that there are 1.15 million classified undocumented citizens in NYS.  How many of these estimates are in Ulster County?

PVB (26:45) –  If you are undocumented and you have police contact, you will not be deported….it’s important for people to know that and to not be afraid.

27:30 –  The Ulster County Legislature and Ulster County Sheriff’s office did not speak at the inception of Resolution No. 138. Why?

36:40 – What aspects of the resolution might keep the Ulster County Sheriff’s office from supporting it?

#6) Privacy Protection Rule: No [County/City/State] official shall voluntarily release personally identifiable data or information to ICE or CBP regarding an inmate’s custody status, release date or home address, or information that may be used to ascertain an individual’s religion, ethnicity or race, unless for a law enforcement purpose unrelated to the enforcement of a civil immigration law.

46:21 –  If a community or county are only stating the laws as they are and as they have always been, why do some portray that there will be some form of punishment for doing so?   How might you address that?

PVB (47:06) –  “For sure it is a miscommunication, a misunderstanding. None of which ever happened before Trump was elected into office. The president can’t restrict funding on his own. Laws would have to be changed, and they are not going to change the law. You will not be deported unless you have done something terribly wrong.”

47:55 – Sheriff, you speak about education as being key here. Could the current resolution be seen as an educational tool?

PVB:  The legislature here wants to set policy for the Ulster County Sheriff’s office. which I don’t believe that they can and if they can, and they do, how does the sheriff’s office follow these restrictions?

JSB: We would prefer that you agree not to volunteer information.

Don’t Ask Rule: [County/City/State] officials shall not inquire into the immigration or citizenship status of an individual, except where the inquiry relates to a legitimate law enforcement purpose that is unrelated to the enforcement of a civil immigration law, or where required by state or federal law to verify eligibility for a benefit, service, or license conditioned on verification of certain status.

JSB: In the intake form when you are being processed, it asks where you were born.

SVB: We don’t ask anyone your status of origin is ever. If you are locked up, the question on the booking form are given to us by the COC. We ask the questions they want us to ask.  It’s in our rules and regulations forms that we don’t ask origin.

00:00 – How can we work together, the Ulster County Legislature and Ulster County Sheriff’s office in committee to come up with something that could be used to show unity?

SVB: In local police agencies, they never ask your immigration status because they refer it to the county.  That’s on us, not them.

JSB: We are not bound by executive order by the Trump administration. If people could know what are the positive relationships have with the public that their fears could be mitigated by that. 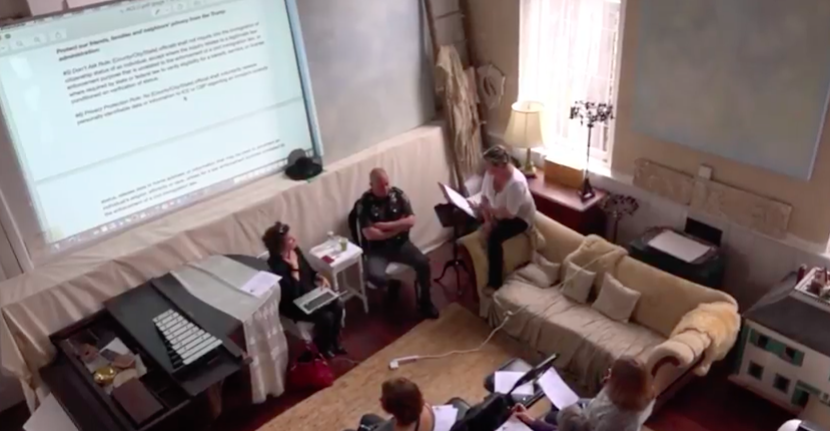 0:44 – Immigrant woman are afraid to report domestic violence crimes. How do we educate this population in your procedure of arrest?

3:55 – Can you clarify what you mean by being locked up for something terrible?

6:22 – What if people are booked but who haven’t been proven guilty, and still ICE has been notified?  How is this documented?

11:31 – Who is the public and protect us from what in this case? There are many talking about rounding people up. There are real stories about people having to leave the country, leave their children. One of the laws that we haven’t talked about here is the 4th Amendment.

14:34: To the degree that there is a threat of violating the 4th Amendment, how is Ulster County dealing with this issue?

15:50 – A person has the right to say ‘no’ during an interview. Are there any consequences of saying ‘no’ and do you follow-up on that?

16:38 – How does our Sheriff’s office protect those who are not guilty and released when ICE might have been contacted?

17:30 – Is anyone here reaching out to the community affected by this?

20:09 – Have officer’s had sensitivity training in Immigration?

23:02 – How is immigration dealt with as it pertains to refugees?

28:12 – What about a person who can post bond, who has been arraigned, who will go to trial but are released because they can post bail. Do they still get reported to ICE?

29:54 – Your office is reflecting NYS authority. So within that, you’re an elected position but when you come up for election and somewhat is running against you, are affiliated with a party?

34:16 –  What would be the difference between a democrat or republican sheriff?

35:27 – In regard to retainers and information of data, is reporting encroaching on procedure and policy within the Sheriff’s department, or can that be construed as something that the legislature could require as a reporting requirement?

40:00 – Do you have a written policy book and changing it would require how?

40:22 – Is there a legislative process for the sheriff to make a change? What are the checks and balances to change policy?

41:01 – Is there a way for the public to know of a policy change by the Sheriff’s department?

41:38 – You mentioned that the majority of people who are in our UC Jail have not been sentenced. Do you have numbers to share in this regard?