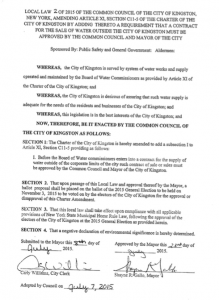 Through KingstonCitizens.org’s unique partnerships, strategic planning and community organizing, Niagara withdrew its proposal after five months of public scrutiny. Since that time, KingstonCitizens.org has advocated for a Water Sales Referendum, which would amend Kingston’s City Charter to include Kingston’s Common Council as part of the decision making process for all discussions related to sale of municipal water outside of the City’s corporate limits. As a starting point, amending the City Charter would allow the public opportunities to weigh in on how their water source is used outside of their community.

“Our Common Council unanimously wanted to be included in the decision making process, especially in this day and age,” states Rebecca Martin, co-founder of the citizen advocacy group KingstonCitizens.org. “After Niagara Bottling pulled out in February of 2015, it became obvious that we needed to look closely at the way the law was written and to work to reform the Water Board’s independence.  The sale of our municipal water outside of Kingston needs to be done out in the open and not behind closed doors where only a handful of people decide. In my opinion, the way the recent Niagara proposal was handled was not democratic at all – and ensuring that our water supply is adequate to sustain our communities’ needs looking forward is the most democratic issue that I can think of.”

The process to create the Water Sales Referendum was led by Ward 5 Alderman Bill Carey (a Democrat). Carey, who also chairs the Common Council’s Public Safety Committee, where the Referendum was sponsored, agrees.

“Our government is based on elected officials representing the people. The fact that there is currently a disconnect, and that the residents of Kingston have no representation when it comes to selling our most vital resource outside of our community, is a dangerous flaw in our City Charter. Passing this Referendum provides a safety net for Kingstonians, so that we can be represented and our voices will be heard if future proposals that may compromise our water supply should occur. I am very proud to have been a part of the solution to keep the Niagara Bottling Company away from our water, but this Referendum is equally important so the future leaders of our city will have a system in place that allows them to be at the table from the very beginning.”

Minority leader and Ward 9 Alderwoman Deb Brown (a Republican) was one of the early elected officials to question the Niagara Bottling Company’s proposal to purchase up to 1.75 million gallons per day of Kingston’s municipal water supply.

“In today’s world, water is a precious commodity and a resource to be protected. We all have read of droughts across certain areas in North America where communities are hunting for clean water while instituting ongoing conservation efforts. We here in the City of Kingston are fortunate to have a clean and safe water supply readily available for our citizens. As elected representatives of the people, it makes sense that Common Council members have a say when companies who are outside city limits want to purchase our water — and for what purpose, as well as the amount they may purchase. Currently the Council does not have that right based on a charter written almost a hundred years ago. That power was given to members of a Water Board to oversee all water matters, which worked for those times. They could never have imagined the future with water being bottled and sold for a profit. It is now time to rectify it. All living creatures, all plants, need water to sustain life and we need to protect our natural resource from abuse or profiteering. It is essential for the life and survival of the City of Kingston and for its future generations. As I have said in the past, ‘Water is now the new oil’.”

When asked why passing the Water Sales Referendum is important, Jennifer Schwartz-Berky, chair of KingstonCitizens.org’s Policy and Planning Committee and a candidate for Ulster County District 7 Legislator (Kingston), says,  “When Kingston was faced with a decision last year that would have affected our economic and environmental future, you didn’t have a choice. You didn’t have a voice. The City Charter is Kingston’s “constitution.” It is the fundamental structure of our government. New York State Law says that your vote matters on any change to our City Charter. The way the Charter is currently structured, the Common Council elected to represent our community has no say regarding the Water Board’s decision to sell our water. This simply doesn’t make sense. It is not how democracy should work. The Water Board should be accountable to the public and the Council should have the ‘balance of power’ regarding the significant decisions that govern our City’s future.”

The Woodstock Land Conservancy (WLC), one of KingstonCitizens.org’s critical partners in educating the public about the Niagara Water Bottling proposal and the sponsor of a recent Watershed Task Force group for the area, also supports the passing of the Referendum.

“This Water Referendum is a crucial step in the process of ensuring that our water remains available to all residents in our area – in the City of Kingston as well as in other municipalities with shared watersheds and water rights – both now and in the future,” says WLC’s Board Chair Kevin D. Smith. “Requiring Mayoral and Common Council approvals for water sales outside the City of Kingston is a sensible step to improve transparency and sound process – which was lacking with Niagara – to ensure that future water sale proposals are carefully and fully vetted and in the best long term interests of Kingston’s residents and water customers.”

As for what is next for KingstonCitizens.org on the municipal water front, Martin is determined.

“There are many questions that need to be answered about water in our area. In the meantime, the public now has a monumental opportunity to vote ‘yes’ on the Water Sales Referendum. By doing so, it will give the public some protection in the short and long term while our community works together with their elected and appointed officials – and, I hope, with others in our region who are also impacted by Kingston’s stewardship – to address some of what’s missing in our current laws to assure the best use of our water supply. It is only in this way that we can do what is best for Cooper Lake as a source of clean water for residents and businesses alike for generations to come.”

The Water Sales Referendum will appear on the BACK of this year’s ballot during the General Election on November 3rd.

In Their Own Words: Why Does Passing the Water Referendum on November 3rd Matter.

KingstonCitizens.org is a community-based organization committed to improving the quality of life of Kingston residents through accountability and transparency between the people and their local government. By providing citizens with current and important information through better communication, our work is meant to nurture citizen participation and empowerment through projects, education and fun.