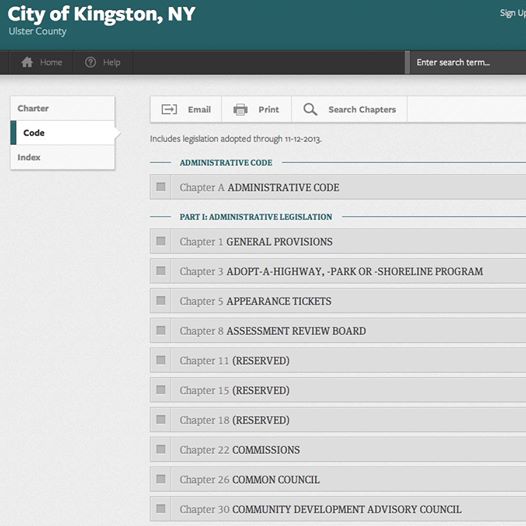 Because we’re paying close attention to the Charter and Code right now, here is an example of how not to go about updating an elected official’s job description.

Recently (maybe even this past week) the Mayor’s office  generated a definition of the Mayor’s role and posted it on the City of Kingston’s website.

We’re all for updating job descriptions of our elected officials, but there are some glaring problems here that the public should understand.  By having a better sense of these processes, the people can take control of what is theirs  – that being city government and how Kingston is managed.

1. HOW DOES THE MAYOR’S NEW DESCRIPTION RELATE TO THE CHARTER and/or CODE?  The Mayor’s text is not what is written in the charter – and based on what he has crafted, one would need to carefully cross reference as to how it relates to aspects of the code.   Take for example his description, “The City Charter names the Mayor as President of the Police, Fire, Public Works and Water Boards“.

Here’s the tricky part. If you look at the administrative code online, it looks to be so.

However, acccording to this DOCUMENT also provided on the city of Kingston, NY’s website (but not reflected in the code), it shows that in fact the President of the Board of Water Commissioners since 2012 as being Joseph DeCicco and not the Mayor of Kingston.

Why is this important?  When an elected official of the highest office doesn’t himself know how the city’s framework is structured, then how would the average citizen?  That said, to everyone’s defense – if the code online isn’t up-to-date, then there isn’t any way of knowing unless you are a sleuth like me.

The charter is the law.  Text is….well, text.  Do we think the description in the charter is light?  Absolutely. Are we concerned that the code online may not be up-to-date to keep up with the changes that occur from year to year? Even more so.  We support an update of it all for elected city positions so that they are more current and detailed – but done so in the proper manner.

2. THE PROCESS IN UPDATING THE CHARTER.   To undergo Charter revisions is a process that requires a commission, public hearings, a council vote and then a referendum on the general election ballot. The Code, along with the Charter, would have to also be addressed.

Although Charter and Code work together, they function very differently. The Charter is a “..document which delineates the legal boundaries of the city, defines its organization, powers, functions, and procedures. Generally, the Charter is the place where you will find matters of a more permanent and historical nature, such as the composition of city council, the various departments, and the procedure for assessment and collection of taxes. The Charter is the basic framework of the city.”

Code is the “…official collection or compendium of laws, rules or regulations of the city consolidated and classified according to subject matter.”  Code, therefore, is constantly changing and should be updated on a regular basis for the sake of clarity and transparency.

Unfortunately, I don’t think Kingston’s code is kept current online – and that’s a very large problem that should be addressed by the council immediately.

You’ll notice at the top of this post the history of when the Charter was amended.  First in 1896 and then not taken back up until 1993 with further amendments in 1994.

In 1993, a commission of volunteers led by Tom Benton worked hard for two years to update the charter in its entirety, ushering in a City Manager form of government.  It went to a referendum and passed by hundreds of votes – a big deal in Kingston.

But City Manager was not something that then Mayor T. R. Gallo supported.  So in 1994,  we’re told that a lawyer out of Poughkeepsie, NY was hired and replaced the term ‘City Manager’ with ‘Mayor’.  The amended document was brought to a new commission that this time, Gallo as Mayor selected who reversed City Manager to a Strong Mayor form of government. This all went down in a five minute meeting with a unanimous vote in favor.  That’s stunning. With an election just around the corner, they had little time to get it on the ballot as a referendum. A public hearing was organized within a two week window following the commission meeting,  then swiftly moved through council. The newly amended charter was placed on the ballot where the referendum passed by a slim margin.

Can you imagine the way the volunteers felt, who put so much into this process with thousands of hours of research and public outreach?   Here’s hoping that history will teach us something.

READ  Tom Benton’s account in a commentary written for the Kingston Times.

3. ELECTED OFFICIALS CAN’T CRAFT THEIR JOB DESCRIPTIONS.   Although it would be convenient, elected officials can’t write their job descriptions as law for reasons stated above.

Important processes such as this are very public ones.   KingstonCitizens.org will host a second educational forum at the end of April to discuss the in’s and out’s of the Kingston, NY City Charter and Code.

2. CHARTER DEFINITION – MAYOR: The Kingston, NY City Charter definition of MAYOR. Be sure to cross check it with the Administrative Code.  ASK YOUR ALDERMAN to look into the update process of the city code. When was it last done? Why are there inconsistencies as pointed out in this post?   VIEW PAGE

3. THE MAYOR WRITES HIS OWN?  The current Mayor of Kingston Shayne Gallo recently took a stab at writing his own job description. You’ll see some of the charter language here, but there are many liberties taken – which an elected official cannot do.  In addition, there appear to be inconsistencies with what commissions the Mayor is ‘president’ and which he is not.  When code that is available online isn’t up-to-date, one might never know.  VIEW PAGE