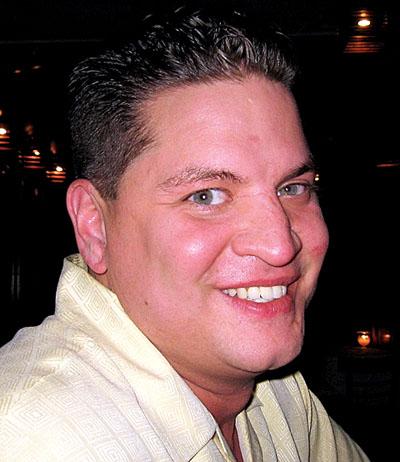 The Kingston Neighborhood Watch has organized a search party for missing local Zach Green. Meeting times are this morning, January 6th at 9:30am at both locations.

Here is a Michael D’Arcy’s letter :

I know this is late notice but tomorrow morning we will be setting up a searc party for Zach Green.

Here is some information….

The father of the Saugerties man says his son has not been seen since Sunday night, when he was spotted at several night spots in Uptown Kingston.

William Green said his son, Zachary E. Green, 32, was last seen about 9:30 p.m. Sunday by a server at Le Canard, a restaurant on Fair Street. The car Zachary Green was driving was found illegally parked on Fair Street, but he has not been seen.

William Green said he spoke with his son Sunday afternoon and again Sunday evening. He said one of his son’s friends said he saw Zachary at the Kingston Holiday Inn about 7:30 p.m. An employee at Chic’s, a bar/restaurant in Kingston Plaza, said he saw Zachary about 8 p.m., the elder Green said, and a server at Le Canard said Zachary knocked on the door of the restaurant about 9:30 p.m.

William Green said the Le Canard server told Zachary the restaurant was closed and she said that Zachary replied, “Oh, OK,” went back toward the car and then walked down the street.

William Green said he filed a missing person report with the Saugerties Police Department Wednesday morning. That department would not confirm whether it had received such a report.

We will have 2 meeting places, one will be in Uptown on the corner of John and Wall St. The other will be downtown at Kingston point.  The uptown group will be going from John St and searching their way down to the Kingston Plaza. We will search the wooded areas and along the river behind the plaza.

The downtown group will be going from the point and head towards the old cement quarry along the Hudson.

Spread the word to anyone else that would want to help as well. Even if you cannot come yourself, sharing the information can help, too Dress warmly with gloves and walking shoes. Walking sticks can also be handy to push away brush, etc.

While we know it will be cold, please consider taking some time and joining the search parties.  Imagine how you would feel if one of your loved ones were missing for days in the cold.  Even if a positive outcome is not to be had, some comfort can be had by seeing the community come together to look for their loved one.  This is an opportunity to show that we are a community and we try to take care of our neighbors.

Thank you and we’ll see you in the morning!