By Rebecca Martin and the KingstonCitizens.org Advisory Board

On Tuesday of next week, the Kingstonian development team will submit an incomplete deviated Payment In Lieu Of Taxes (PILOT) agreement to you for discussion. Council committee members will be in a position to either pass it out of committee for a full council vote in August or table the matter. We urge the Council to table the proposal thereby allowing time for the Finance and Audit committee to workshop the incomplete agreement.

By requesting a special Finance and Audit committee meeting outside of the regular monthly scheduled time, it suggests that the Mayor wants the Council to make a swift and ill considered decision. As the direct representatives of Kingston taxpayers, we expect that his request will not pressure you. Council members must thoughtfully and carefully review the proposal so that the sacrifices being requested of the public are clear before approving the deviated pilot.

If the PILOT is approved unchanged, the loss of potential tax revenues to our city and school budgets for mostly luxury and boutique hotel parking could simply devastate our already fiscally strained community.  We implore you to be keenly aware of your responsibility in assessing the value of the PILOT especially during a time of pandemic induced budget cuts because once approved there will be no going back.

1. THE INDUSTRIAL DEVELOPMENT AGENCY (IDA) MAY NOT BE AUTHORIZED TO GRANT THE KINGSTONIAN PILOT APPLICATION.  In a letter submitted to the IDA on July 17, 2020,  Victoria L. Polidoro, a lawyer who represents several property owners in Uptown, Kingston, points out that the IDA is not authorized to grant the application.  “As a threshold matter the IDA does not have authority to consider or grant the Application for the Project which includes residential housing units. The IDA’s Housing Projects Policy, which was reaffirmed on January 8, 2020, only allows IDA financing in limited circumstances. It provides that:   A. The Agency will only consider the granting of any “financial assistance” (as defined under the Act) for following projects that provide housing:  (1)  a project that satisfies the definition of a continuing care retirement community project under Section 859-b of the Act; or (2)  a project by an industrial, manufacturing, warehousing, commercial, research and recreation facility (as defined in the Act) that provides workforce housing for its employees.“ By approving the PILOT agreement now, the Council may be taking action prior to being certain that the IDA can legally authorize the PILOT request.

2. THE IDA SHOULD NOT CONSIDER THE APPLICATION UNTIL THE PENDING ARTICLE 78 IS RESOLVED.  Included in Polidoro’s letter, she states that, “The IDA should refrain from acting on the application until the pending SEQRA litigation is resolved, as any decision it makes may thereafter be invalidated.“

4. AT A TIME OF FINANCIAL CRISIS WHEN THE CORONAVIRUS PANDEMIC HAS LED TO CUTS IN CITY SERVICES AND JOBS, LOSS OF TAX REVENUE COULD BE SIMPLY DEVASTATING.  While the intricacies of the IDA, real estate investment, and PILOTs are complex, what should be clear is that the proposed Kingstonian PILOT deal could potentially harm the least well off in the city as well as hardworking taxpayers who already struggle to pay school and property taxes. For Council members who have advocated for social justice in housing, services for the poor, and children in need, the PILOT should be particularly worrisome. While not all PILOTs are exploitive, they must be balanced against the potential gains an investor or industry may bring to the area. The cost of the PILOT may be offset by community gains that have not yet been realized and won’t come to fruition until after the investment. Those gains may be larger than the PILOT subsidy. For example, if you averaged each Kingstonian luxury apartment to cost $1,800 per month x 129 without including the affordable housing, that’s $2.8 million dollars per year gross revenue just for apartments. Over 25 years, that’s $69.6 million dollars plus the additional grants and tax incentives. The PILOTs that cause concern, which is true in this case, are those structured to eliminate the investor’s financial risk while displacing that risk on to taxpayers. While every investor would like to eliminate risk, ordinary citizens aren’t able to shape the political landscape to achieve their preferred financial ends. Furthermore, new residents and businesses will be adding costs to the City’s budget for things like police, fire and sewer maintenance. These costs are normally covered by property taxes. For all of these reasons, their proposed $30.6 million dollar subsidy deserves increased scrutiny for the actual benefits to the city.

5. AFFORDABLE HOUSING UNITS IN THE KINGSTONIAN PROJECT ARE NOT BOUND BY NYS RULES.  The 14 affordable housing units that developers inserted into the Kingstonian project after much outcry were not a concession. The developer added another floor to include the additional units, now making more money: the project became even bigger without the developer sacrificing anything in terms of profit. Additionally, the developer, as a private investor, will create these units without state tax credits and will therefore not be bound by state rules. Without a binding agreement (that outlines the units’ starting rent, their size and annual escalator rate), there is nothing to prevent the affordable units from escalating in value. The Kingstonian’s “affordable housing” could become luxury apartments at any time. The PILOT agreement can and must stipulate their affordable housing criteria.

6. KINGSTON RESIDENTS PAY SCHOOL TAX IRRESPECTIVE OF WHETHER THEY HAVE CHILDREN WHO ATTEND PUBLIC SCHOOL BECAUSE EVERYONE BENEFITS FROM AN EDUCATED POPULACE.  The Kingstonian development team says that it anticipates minimal impact on the Kingston City School District as a similar project of theirs in Poughkeepsie has produced no school-aged residents. Following this logic, anyone without children in the public school system should not be required to pay school taxes.

7. THE KINGSTON COMMON COUNCIL DECISION IS BEING MADE WITHOUT FULL TRANSPARENCY EVEN THOUGH THE OUTCOME WILL AFFECT THE LONG-TERM FINANCIAL HEALTH OF THE CITY.   As pointed out in Polidoro’s letter to the IDA, even if the IDA has authority to approve the application and the Applicant could demonstrate that additional parking spaces would be created, the Application lacks sufficient information on the Project’s finances. The Applicant alleges that the costs of constructing the parking garage total approximately $16.8 million which, after financing, would purportedly result in annual costs of $1,067,000 over 25 years. However, it is unclear if these cost estimates are accurate. The data supporting the Applicant’s calculation has not been publicly posted. The Council should request that the IDA release all data provided and engage an independent consultant to audit the Applicant’s estimated costs to determine their validity. If the agreement truly benefits the community, the data will prove it.

8. NYS DOWNTOWN REVITALIZATION INITIATIVE (DRI)  The applicant has said that if the PILOT is not approved, then the project will not go forward and the grant funds awarded to the Kingstonian project (or the entire amount, it isn’t clear) through NYS’s Downtown Revitalization Initiative (DRI) grant will be revoked.  Has the city confirmed with the State that this is true? Could the grant funding for example, if not used for the Kingstonian project, be transferred to one of the unfunded grant projects proposed in the DRI application?

READ: The Kingstonian PILOT – There is more at stake than just parking 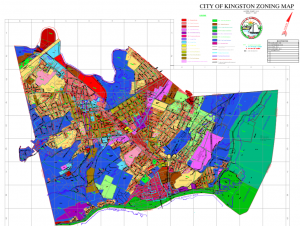 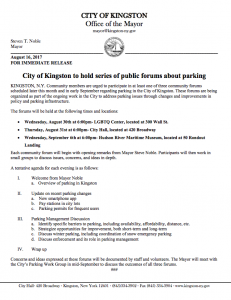 In conversations around the City of Kingston, parking is a hot topic.

Uptown, there was a debate around Mayor Steve Noble’s plan to increase parking costs and add meters to municipal lots where there previously had been none, with business owners countering the plan by advocating for free parking. Meter increases went into effect just recently, and parking kiosks are already showing up near their intended municipal lot.  In an effort to compromise, the city is also offering parking permits for frequent users of the City of Kingston’s municipal lots. Purchase a parking permit in advance of the installation and activation of new payment stations in six of the City’s municipal lots costs $10, and the permit is valid through December 31, 2017.    VIEW

In Midtown, there’s ample parking, according to the city’s consultant for the Comprehensive Plan Zoning subcommittee.  And the conversation has pretty much ended there.