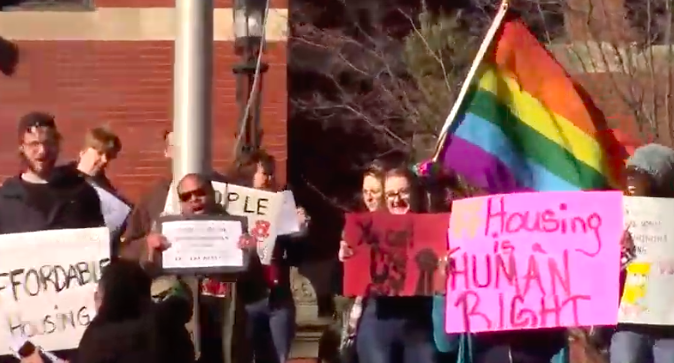 CLICK TO WRITE  (be sure to add your name and municipality at the end and any other message that you wish to include):  Request that the Kingston Common Council and in particular, the Council’s Finance Committee demand that the Kingstonian developers provide affordable housing guarantees in their PILOT agreement.

In our recent post about the Kingstonian PILOT, we reported on the Ulster County Industrial Development Agency’s (UCIDA) consideration of a $30.6 million tax subsidy to real estate developers in exchange for parking spaces. We shared our concerns that a subsidy of this size to the Kingstonian for parking spaces means significantly less money to invest in City schools, streets, public housing, and infrastructure. “It increases the likelihood that already overburdened taxpayers will be forced to cover any fiscal gap with increased school and property taxes.”  We demanded that a true value be placed on the developer’s PILOT before a public hearing is held so that the residents of Kingston are fully aware of the role they are being asked to play.   READ “The Kingstonian Project: There is more at stake than just parking”

The Kingstonian PILOT: Where the public good is a parking garage

It isn’t clear how to affix a value on what will become a privatized parking garage funded by public through subsidies. We’ve got nothing but questions.

Affordable housing for now, but for how long and at what cost?

Part of what has been portrayed as a public good for the Kingstonian are the 14 affordable housing units that were included last fall after much outcry from the community. Even though the Area Median Income (AMI) is high (presumably determined by the Kingston-Poughkeepsie MSA or some other measurement beyond Ulster County), it’s good to have an affordable component added to the project.

Typically, not-for-profits (NFP) who are working on affordable housing projects receive state tax credits and in return are bound by rules.  In some cases, those units can remain affordable for up to 50 years. As a private developer, the Kingstonian isn’t relying on the state and therefore, can use the “affordable housing” language without being bound by the same rules.

The PILOT agreement at this point is perhaps the only avenue to provide guarantees that prevent the affordable units from escalating in value. It could outline the units’ starting rent, their size and annual escalator rate.  Without that outlined somewhere, the Kingstonians “affordable housing” could become market rate at any given time.

In a recent PILOT analysis completed for the City of Hudson by Joshua Simons of the Benjamin Center, the report highlights key variables and standards in the region. Although the project in Hudson is all affordable housing created by a foundation (apples to oranges here), we presume that if the Kingstonian project were to do the same kind of study for its PILOT it would prove to be an anomaly.

As the terms of the Kingstonian PILOT are not yet fixed, now is the time that our decision-makers and the public can request a full disclosure of the true value of the PILOT (in order to avoid the developer inflating the public benefits) as well as a clawback provision and affordable housing guidelines.

Beyond that, what revenues do the Kingstonian developers stand to gain on luxury apartments over 25 years? Even thought he PILOT process is well underway, we don’t know as the information is deemed ‘trade secrets’ as are the sources of financing which the developer refuses to reveal.

It’s impossible to understand why decision makers are not insisting on making all of the developer’s information public given the expectation of tens of millions in subsidies. Without it, we can’t be sure that the Kingstonian project would require a PILOT at all.

Image above provided by The Kingston News “Kingstonian: Listen to the Community” rally

1 thought on “Affordable Housing and the Kingstonian Project PILOT”