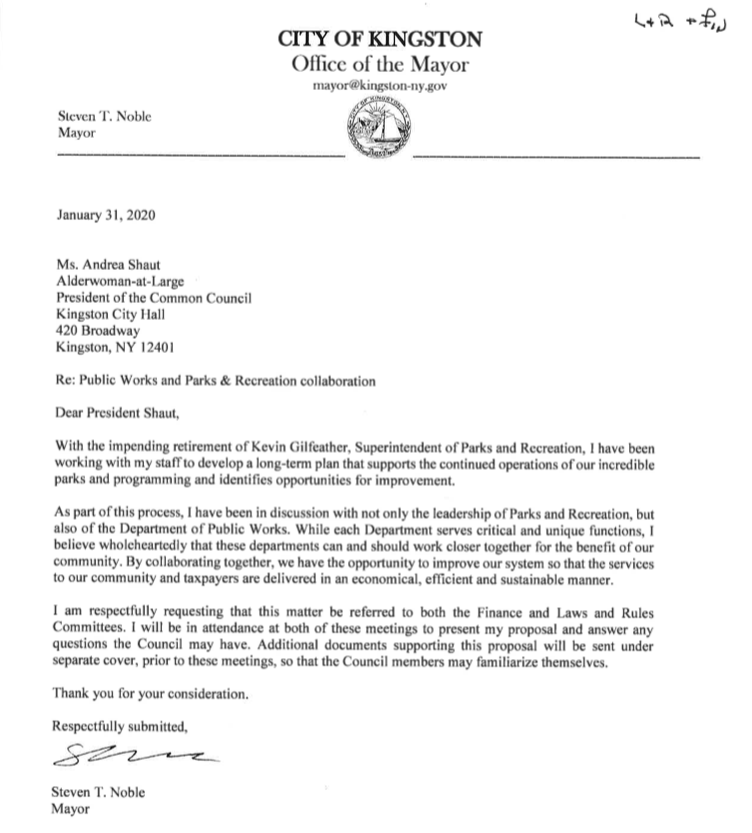 On January 25th, Kevin Gilfeather announced his retirement as Superintendent of Kingston’s Parks & Recreation Department after 23 ½ years in the position.  Just six days later, Mayor Steve Noble, who for many years worked under Gilfeather as one of two environmental educators, submitted the following communication to the President of the Common Council with the hope of getting special business added to its February agenda. It read:

With the impending retirement of Kevin Gilfeather, Superintendent of Parks and Recreation, I have been working with my staff to develop a long-term plan that supports the continued operations of our incredible parks and programming and identifies opportunities for improvement. As part of this process, I have been in discussion with not only the leadership of Parks and Recreation, but also of the Department of Public Works. While each Department serves critical and unique functions, I believe wholeheartedly that these departments can and should work closer together for the benefit of our community. By collaborating together, we have the opportunity to improve our system so that the services to our community and taxpayers are delivered in an economical, efficient and sustainable manner. I am respectfully requesting that this matter be referred to both the Finance and Laws and Rules Committees. I will be in attendance at both of these meetings to present my proposal and answer any questions the Council may have. Additional documents supporting this proposal will be sent under separate cover, prior to these meetings, so that the Council members may familiarize themselves.

Mayors and citizens alike can submit communications, by letter or email, to the Common Council requesting that it take up a certain issue. From stop signs to Department requests, the Council President will assign the matter to whichever Council Committee she deems appropriate.  In Kingston, these communications are made publicly available as hyperlinks in the online agenda for the Council’s regular monthly meeting. This helps the public to anticipate forthcoming issues that may be taken up by the Common Council.

In this case, the Mayor’s communication arrived without any detail as to what he had in mind, only the promise that “additional documents supporting this proposal will be sent under separate cover, prior to these meetings, so that the Council members may familiarize themselves” and a request to be added to both the Finance and Laws & Rules Committee agendas.

Then, late in the afternoon of the following day,  the Mayor got more specific in a press release, announcing his plans to “integrate leadership teams” of the Department of Public Works (DPW) and Parks & Recreation Department by creating two new positions and expanding the role of the current Superintendent of DPW.  Serving as the new Deputy Superintendent of Environmental Services would be his wife, Julie Noble, who would be “provisionally selected” until she sits for a New York State civil service examination. According to a recent news article,  Julie Noble’s new salary would rise by as much as $23,000. The Mayor’s plan also calls for the creation of a new Recreation Director position, which would be filled by his former Confidential Secretary.  (Please see clarification below)

The Mayor’s announcement occurred before the Council knew the details of his proposal. His press release was likely news to most of them, as it was to the public.

The Mayor’s rush to accomplish his desired Department restructuring creates a messy situation for everyone. It might very well jeopardize a possibly sensible idea. Examining its merit is the responsibility of the Common Council, beginning with its Laws & Rules Committee and later, the Finance Committee. According to Kingston’s Charter, reorganizing Departments calls for a local law process.

The most perplexing part of this whole thing is the Mayor’s intention to fill the new positions with a family member and a friend—the very definition of nepotism. The Deputy Superintendent of Environmental Services, a position intended for Julie Noble, would report to the Superintendent of Public Works, who serves at the pleasure of the Mayor without any protections in place for his own job. If he takes issue with the Mayor’s wife down the road, who is more likely to have the Mayor’s ear?  Needless to say, this structure creates a conflict of interest and could violate the City of Kingston’s ethics law (see 49-3 Standards of Conduct).

We reached out to Council President Shaut today to ask if the Council had received any more information outside of the posted agenda packet from last evening’s Council meeting on the Mayor’s proposal and whether or not the item would be sent to two Council Committees at once.

“The Mayor has not submitted any more detail to the Council at this time. The Mayor did request the communication to be sent to both the Finance Committee and Laws & Rules Committee for February,”  wrote Shaut.  “Originally, I did assign it to both Committees for the month; however, after learning more about his request and the fact that it does need to be a local law process,  I have determined it would be inappropriate to discuss at Finance before it is vetted by Laws & Rules.”

Shaut also included her response to the Mayor’s communication.  “After gathering more information on the specific process that will need to take place with the Council regarding your communication of a collaboration between DPW and Parks & Rec, I am taking off the communication to the Finance & Audit Committee for the month of February. According to our Charter, restructuring departments can only happen through a local law by the Common Council. The appropriate Committee to address your proposal first would be Laws & Rules. The Finance Committee’s decisions will happen only once, and if, the Local Law is shaped.”

The Council President’s clarity in these communications helps to outline the proper process that should be followed.

City government is not a Mayor’s oyster. It belongs to the public, and a good government has a strong system of checks and balances to protect the public interest.  In this case, the merging of Departments, the immediate creation and filling of new positions, and the reorganization of current DPW staff should be placed on hold until after the Common Council has had the opportunity to weigh the Mayor’s proposal and hear from the public.

Clarification:  Although the executive branch has not provided more detail about plans to restructure the DPW and Parks & Recreation, we have learned in the meantime that Lynsey Timbrouck who would be hired as the Director of Recreation took the civil service exam in 2018, prior to any knowledge of Gilfeather’s plans to retire. On the exam, she scored a 90, making her 2nd on the list.