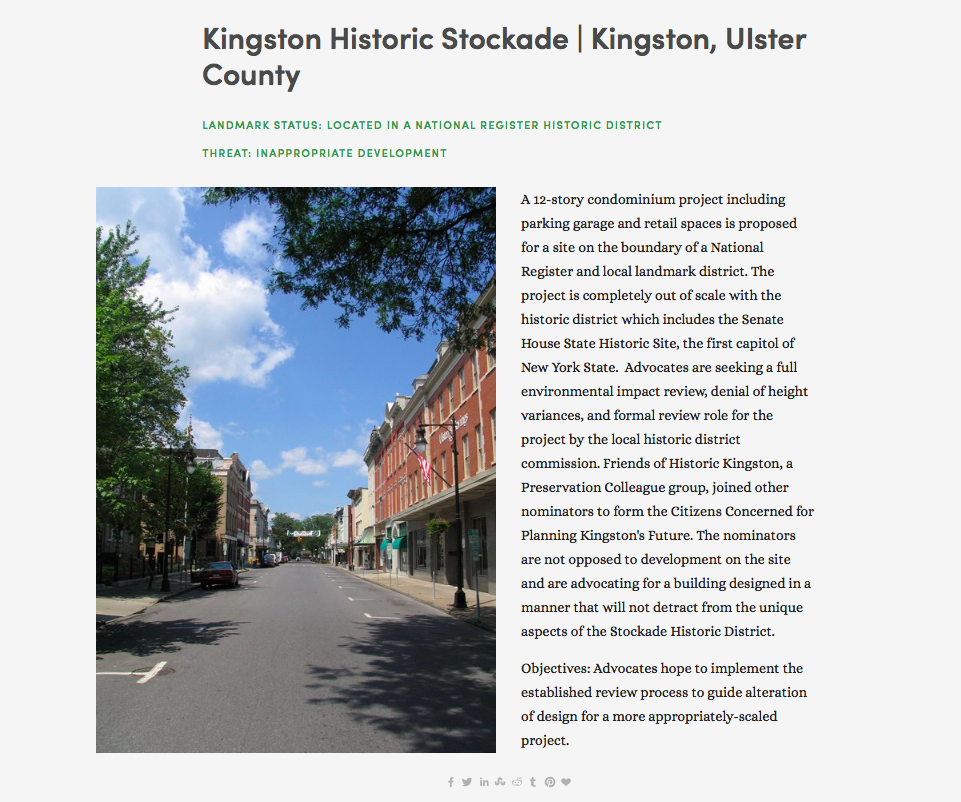 With the Kingstonian project’s State Environmental Quality Review (SEQR)  behind us, KingstonCitizens.org is in the midst of creating a detailed timeline of the process  to be part of the public record. Doing so has taken us back nearly 20 years to the early 2000s when the Mixed Use Overlay District (MUOD) was created. While digging through the archives, we have come across items like the one below from 2007 when the Kingston Historic Stockade was nominated for and selected by the Preservation League of NYS as one of its “seven to save” preservation campaign.

That successful effort was largely thanks to the late Avery Smith, then the chair of the Friends of Historic Kingston (FOHK) board, and others including Ed Ford, who led a coalition of partners who advocated for new construction “designed in a manner that would not detract from the unique aspects of the Stockade Historic District.”  The 12-story mixed-use building with a parking garage, proposed by the NJ-based Teicher Organization, has a lot of similarities to today’s Kingstonian project in size, location, and uses. Smith was also strongly opposed to the Kingstonian design as he believed the scale and architecture is incompatible with the Stockade.

In addition to mapping the Kingstonian SEQR process, we are creating timelines for ten (10) other controversial campaigns that we were also deeply engaged on, including Niagara Bottling, Water Sales Referendum, Shooting Range/Gun Shop, GlidePath/Lincoln Park Grid Support Center. Each one will be collaborative so that members of the public can include  things we may have missed.

“A 12-story condominium project including parking garage and retail spaces is proposed for a site on the boundary of a National Register and local landmark district. The project is completely out of scale with the historic district which includes the Senate House State Historic Site, the first capital of New York State. Advocates are seeking a full environmental impact review, denial of height variances, and formal review role for the project by the local historic district commission. Friends of Historic Kingston, a Preservation Colleague group, joined other nominators to form the Citizens Concerned for Planning Kingston’s Future. The nominators are not opposed to development on the site and are advocating for a building designed in a manner that will not detract from the unique aspects of the Stockade Historic District.

Objectives: Advocates hope to implement the established review process to guide alteration of design for a more appropriately-scaled project.”

What KingstonCitizens.org will be following in 2020

These are our top three items to follow in the new year.

1. Kingstonian project’s discretionary decisions.  A project (or action) like the Kingstonian is subject to SEQR when any state or local agency has authority to issue a permit, license, or other type of approval for that action.  SEQR also applies if an agency funds or directly undertakes a project, or adopts a resource management plan, rule or policy that affects the environment. It’s only after the SEQR process is complete that involved agencies can move forward with their decision-making. On December 16, the Kingston Planning Board as Lead Agency of the Kingstonian SEQR process made a negative declaration. The developer will likely not waste any time seeking agency approvals.

Key decisions include (please check the agendas attached from the City of Kingston for updates on discussion items or contact Elisa Tinti, City Clerk at (845) 334-3915 or email cityclerk@kingston-ny.gov):

Kingston Zoning Board of Appeals
Appeal: Mixed Use Overlay District (MUOD) Interpretation
Next meeting: The next meeting is not yet listed on the City of Kingston’s website, though it is typically meet on the second Thursday of the month at 6:00pm. Please contact the board chair for more details.
Contact: Tony Argulewicz, Chair at aaargulewicz@aol.com

2. City of Kingston Charter Reform In June of this year, Alderwoman Andrea Shaut who chaired the council’s Laws and Rules Committee in 2019, introduced city charter reform. According to the Department of State’s Division of Local Government Services ‘Revising City Charters in New York State’ it explains, “Why should cities undertake charter revision? There are several reasons, generally stemming from the fact that a charter affects everything the city government does. It provides the basis for most municipal regulatory functions and for the delivery of municipal services. An obsolete charter can be responsible for many municipal problems. lf it contains provisions which are unworkable under current conditions, municipal officials may have to make a difficult choice between being responsible for inferior service delivery or inviting legal challenge for deliberate, albeit well-meaning, deviation from the law. Until such provisions are eliminated, the most competent officials will be unable to carry out their responsibilities both efficiently and legally. Even though a charter may not be so obsolete as to present dilemmas of conscience, revision may well lay the basis for improved governmental operations. A good charter should provide a clear distribution of the powers of city government and clear descriptions of the duties and powers of municipal officials.”

Now, as president of the Common Council, Shaut will be in charge of appointing leadership and membership of all council committees, which includes Laws and Rules. We hope that she, and our council as a whole, will place this matter as a top item to set forth in the coming year (s).

3. City of Kingston Comprehensive Plan Zoning. In his 2018  “State of the City” speech, Mayor Steve Noble said that his “…administration will be focusing on overhauling our Zoning Code. …I will be launching the second stage of the zoning update and will be recruiting local volunteers to delve into such complex subjects as affordable housing, urban agriculture, parking and parking waivers, form-based codes and much more. This work is necessary in order to ensure that our zoning is consistent with our Comprehensive Plan, spurs responsible economic development and preserves our community’s high quality of life.”

Later, in early 2019, he created a Comprehensive Plan Task Force. Over the summer months, the group drafted a “Request for Proposals” (RFP) for a professional planning consultant. The selection committee of the task force is now reviewing the handful of proposals that were submitted. They will make a recommendation to take to the Common Council in early 2020.

2020 promises to be an intense year with a presidential election.  But it is at the local level where key decisions are made.  Going forward into the new year, we wish for you to remain engaged, inquisitive and fearless.