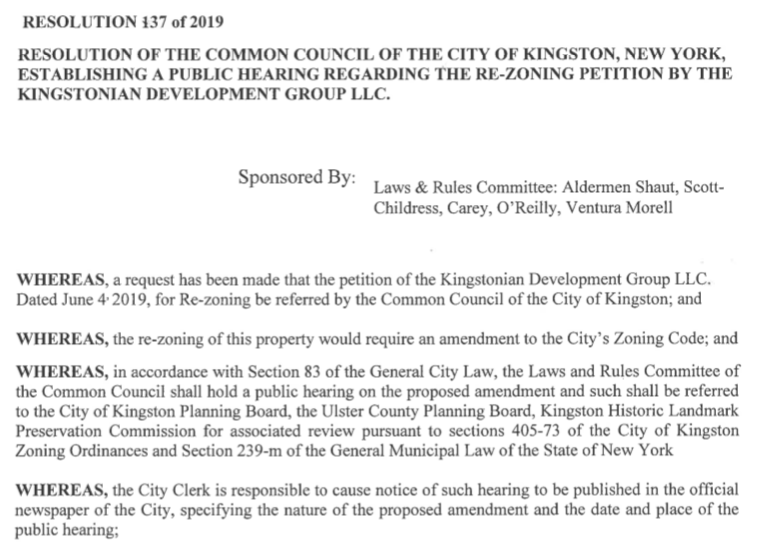 It remains unclear to citizens how the MUOD can be applied to a project like the Kingstonian, which is entirely new construction for the reasons outlined above. Should it have instead been directed to the Kingston Zoning Board of Appeals for a variance? As usual, the Planning Department has not responded to any of our inquiries seeking clarity on the matter.

Beyond that, why is the Planning Department, after months of reviewing the project application and well into the SEQR process, only now addressing the fact that 12% of the project site lies outside the MUOD and therefore needs a zoning change?  Had it been identified at the outset, would the process have been different? Would the Common Council, whose responsibility it is to approve zoning amendments, have needed to act before the SEQR process began?

Where are we now?

The developers petition, received by the City of Kingston’s clerk’s office on June 5, 2019, requests a “zoning district overlay change of 0.313 acres of improved lands whích are situate adjacent to and outside of the Mixed Use Overly District for inclusion within the Mixed Use Overlay District by extension of the present Mixed Use Overlay District and by the accompanying Zoning Map Amendment in the City of Kingston, County of Ulster and State of New York.”  According to Ward 9 Alderwoman Andrea Shaut who is also chair of the Council’s Laws and Rules Committee, the council has 90 days from the petition date to vote on the zoning amendment. 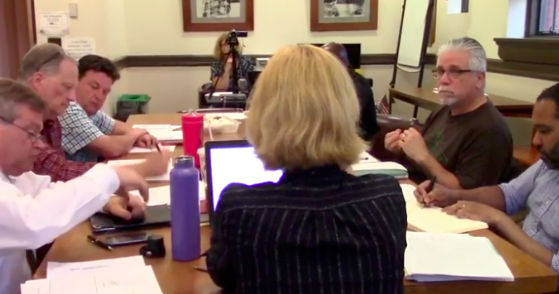 The  process by which a specific lot is granted a zoning district exception in this location includes three involved agencies in the SEQR process – the Kingston Planning Board (KPB), the Ulster County Planning Board (UCPB), and the Kingston Historic Landmark Preservation Commission (HLPC).  They have only 30 days to respond. At the July 15th Planning Board meeting, the reviewed the request without any comments. 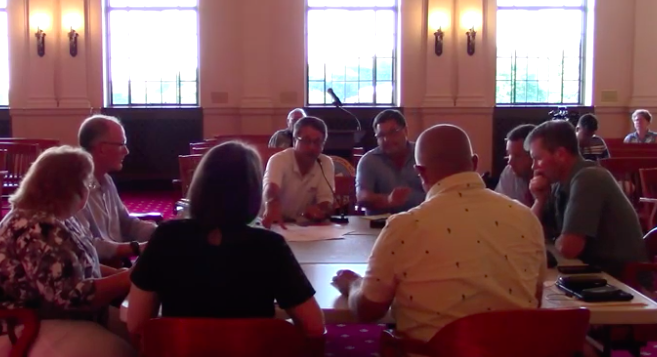 As part of the process, the Council, also an involved agency, must set a public hearing which has been announced for August 12 at 6:30pm at Kingston City Hall, Council Chambers.

From there the matter will be sent to the Common Council’s Laws and Rules Committee where on August 21 council members will discuss public comments and the responses from the other involved agencies (KPB, UCPB and HLPC). If it passes through committee at that meeting, the amended MUOD will go to the full Council for a vote in early September.

What can you do?

Attend the Common Council’s August 12 public hearing on the MUOD amendment.  If you wish to testify, you can request an explanation of the applicability of the MUOD to a project like the Kingstonian and how a significant portion of the project site laying outside of the district was belatedly discovered six months after the SEQR process got underway.

Even though the Planning Department is the responsibility of the city government’s executive branch, the public can still request that our Common Council press them to do a better job outlining and communicating the process in advance.

The Common Council does not answer questions during a public hearing, but will likely address them at both the Laws and Rules Committee meeting on August 21st and then again during Council Caucus in September.

READ  “Zoning, the Mixed Use Overlay District, Comprehensive Plans and the Kingston Project”

3 thoughts on “Kingstonian Zoning Amendment and the Kingston Common Council”