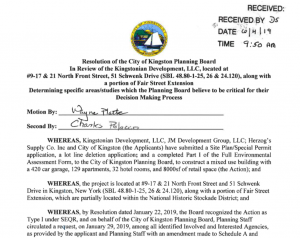 “The purpose of tonight’s meeting is for the planning board to determine specific areas/studies which we believe will be critical for the decision making process with regard to the Kingstonian” – Wayne Platt, Chair of the Kingston Planning Board

Here’s a quick summation of the key points from the meeting:

It appears as though the applicant and planning board as lead agency are doing their own version of scoping (as predicted in earlier months) to bring the project to a neg dec come September.  As a coordinated review, the planning board’s decision on the environment will apply to all of the involved agency’s discretionary decision making once SEQR concludes (a neg dec) going forward.

51:10   Regarding the Kingston Common Council as an Involved Agency “….we can’t do anything with the Common Council taking action until a determination of significance is made under SEQR so any discussions have been preliminary at they point, but this is a coordinated review for SEQR so though that documentation has been sent to the Common Council, they’re free to comment during the pendency of SEQR…”

This is precisely what the Kingston HLPC provided, also an involved agency, in their letter submitted to the planning board back in March. Their concerns were mostly disregarded last evening due to recent ‘deliberation’.

0:00  The planning board states that they would rather not comment on the Kingston Historic Landmarks Preservation Commission letter at this time.

“Is this the official comment of the HLPC or are they still debating?”  (Jacobson)

“I believe that there’s still some debate going on with that.” (Platt)

“There’s a question about deliberation on that.” (Cahill)

“Are we going to get more input from them regarding these comments?”  (Jacobson)

“This is the preliminary letter that is part of the public record right now. It’s available for folks to see on our website, but there is some further deliberation going on by the HLPC and we’re waiting for further comment from them at this time.” (Platt)

“Is it time to make comments on architectural aspects of the project?” (Jacobson)

“I think it’s ok that we comment on architectural comments outside of what the HLPC recommends.” (Platt)

9:56:  Timeline for studies to be done for a determination to be made.

“What do you believe would be an appropriate timeline to get all of these studies together?” (Platt)

19:30:  Resolution read into the record VIEW

“The City of Kingston Planning Board in review of the Kingstonian Development LLC….along with a portion of fair street extension determining specific areas/studies which the planning board believes to be critical for their decision making process….one, a visual impact study with points as defined below the recommendations followed in the SHPO letter that was provided an archeological report and geotechnical report which includes plants and animals identified potential endangered species, a water supply report, sewer report, wastewater report, traffic impact analysis with parking demand and delivery applications for demolition HLPC notice for preservation and green technologies / energy efficiency and a timeline anticipated section – that the following location points will be examined for a visual impact analysis of the project…the appropriate agencies will be notified and materials will be posted on the city website that this meeting will be reconvened…” (Platt)

“The resolution doesn’t just limit us to these items, correct? I mean, if we get these materials and want further study we have the ability?” (Jacobson)

“….the following studies/reports to be submitted for further review and final determination on any environmental significance and or supplemental information that this board deems necessary…” (Platt)