October 17 was a great day for historic preservation in Kingston for three reasons:

1) Mayor Noble, in presenting his proposed budget for 2019, announced that he is creating a permanent part-time preservation administrator position in the Planning Department. Members of the community have been advocating for such a position for years. If the Common Council approves the Mayor’s budget, The City of Kingston will soon have a knowledgeable person on staff to answer questions about district boundaries, help applicants with projects needing commission approval, promote historic tax credit opportunities, advance municipal preservation goals, and more.   (Click on image to review Mayor Steve Noble’s 2019 Budget Announcement starting at 15:50 – 16:36)

2) Following the Mayor’s budget presentation, the Common Council’s Laws & Rules Committee convened for its monthly meeting. Chair Bill Carey announced that the committee is no longer considering the Corporation Counsel’s draft legislation to merge the Heritage Area and Historic Landmarks Preservation Commissions (HLPC). Instead, other solutions are being studied to improve the efficiency of the two commissions, such as eliminating overlapping application reviews.

3) Carey then welcomed two members of the HLPC to present new draft legislation that, if adopted, would swap Kingston’s existing preservation ordinance with one that is more comprehensible and consistent with national standards. Vice Chair Marissa Marvelli explained that legislation being proposed is based on the 2014 New York State Model Preservation Law, which was crafted by the New York State Historic Preservation Office and the Preservation League of New York. It uses language that is concise and clear; incorporates standards and practices that have been developed over the last three decades; stipulates a greater degree of interfacing between the HLPC and city government so that the Commission does not operate in a silo; and codifies the requirements of the Certified Local Government Program, of which Kingston is a participant.   (Click on image below to view new preservation model law) 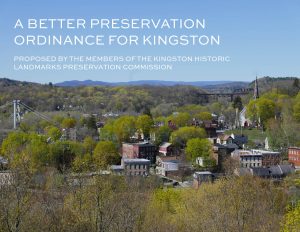 This proposed ordinance incorporates some minor changes recommended by the Corporation Counsel’s office, namely measures that enable alternate members to be appointed, allow the mayor to remove a member for cause, and stipulate the Zoning Board of Appeals as the appeal body for HLPC decisions. It also proposes new preservation tools to protect scenic landmarks, publicly-accessible interiors, sites of exceptional significance that are less than 50 years old, and sites that may contain important pre-historic information or archaeological evidence worthy of documentation.

The net effect of these improvements is greater clarity and efficiency with the management of Kingston’s historic resources, which in turn will help the community better engage in the process. Kingston adopted its existing ordinance more than 30 years ago. It’s high time that it be reevaluated. By adopting the updated ordinance, the Common Council would be re-affirming the relevance and importance of preserving Kingston’s extraordinary heritage for a new generation. Let’s give them all the encouragement they need.

VIEW: A detailed explanation of the changes as presented at the October HLPC meeting.