On Wednesday, the Ulster County Resource Recovery Agency (UCRRA) unanimously passed through Resolution No. 2445 that will end single-stream recycling for the agency on December 31st, 2018 and resolution No. 2446 to increase tipping fees for the remainder of the year beginning July 1, 2018.

What does that mean for Kingston?

Single stream recycling is Kingston’s current system, and we made a large investment in order to do so between 2011 and 2013 with UCRRA’s blessing.  Although Kingston is the only municipality who does so through UCRRA, other communities in Ulster County engage in single stream recycling through private haulers without any trouble.

The City of Kingston, that serves approximately 24,000 people, must now scramble to figure out how to manage its single-stream recycling  before the end of the year and in the meantime, the costs to use UCRRA as we have will TRIPLE from $20 per ton to $76 per ton in July ($61 + $15 user fee). The price may fluctuate from month to month, and be even higher until single-stream is discontinued at UCRRA and we go off on our own.

The bitter pill in all of this for the public is that during the UCRRA Board’s informational meeting earlier in the spring, the agency was aware of the potential changes in the market last October. Prior to the City of Kingston adopting its municipal budget and with more time to engage in discussions with the public and private enterprises.

VIEW  Video
Brought to you by KingstonCitizens.org thanks to the Kingston News

KingstonCitizens.org will host a public educational forum on the UCRRA board in September of 2018.

The public can submit comments for the next 10 days (through June 24th) to UCRRA@ucrra.org

I could also talk to you at length about the amount of money spent on mechanizing our equipment to have the single stream recycling trucks that we purchased with state dollars. I could also speak to you this evening about how our recycling rates have almost doubled in the city of Kingston since we implemented this new recycling program. But in five minutes, I can’t do that.  I also don’t believe I can do that in the month in a half that we’ve had since UCRRA announced its plans to discontinue single stream recycling.

It should involve all of our residents. And the agency needs to step up and engage with our communities and really decide how can we build a better, more sustainable and also more resilient recycling industry here in Ulster County. And there is no way that that can happen before December 31st of 2018 before the proposed switch that you’re asking us to do.

We need to be able to spend that time working together to decide once and for all how we do this. As many of you know, it’s taken the city of Kingston four years to completely implement single stream recycling in just the residential neighborhoods. On Tuesdays, we still have dual stream recycling, for the most part, on our business commercial districts in the city. And so we still haven’t gone fully single stream.

And yes, we all recognize that the market is changing, and that we have a huge issue that we all have to tackle together. But again, I don’t believe it needs to be done in six months. I don’t believe it needs to be done like this.  I encourage all of you to consider that when you’re deciding on how the board is voting on these next two resolutions. And so with that said, I just want to say thank you again for letting me speak this evening.” 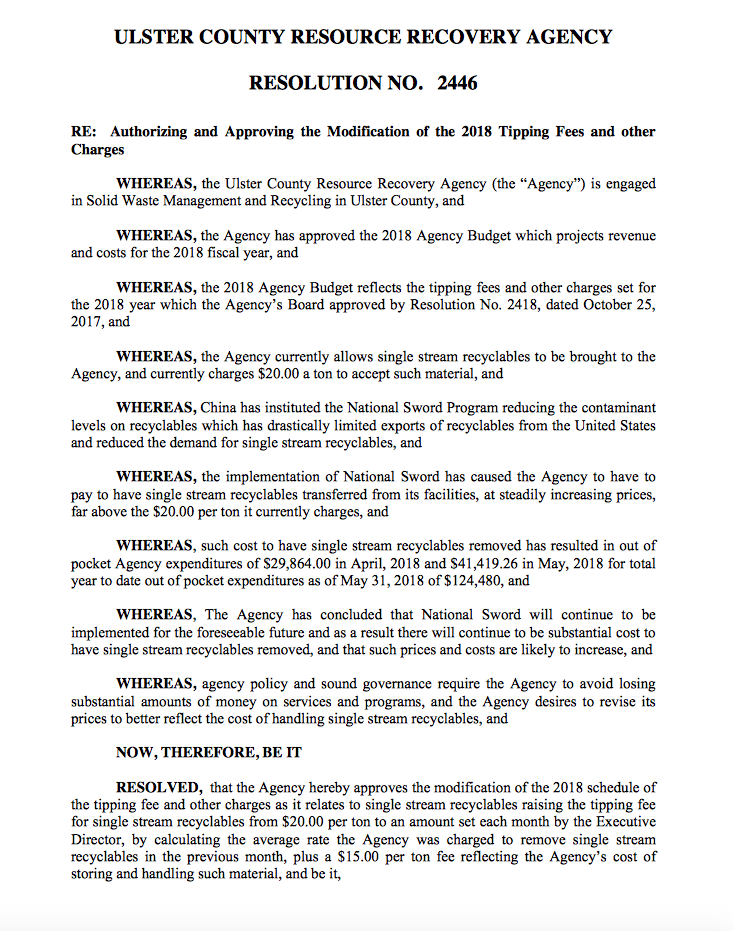 In what might might very well be in my top 10 most perplexing processes I’ve witnessed in 12 years at KingstonCitizens.org,  good sense prevailed and Resolution #107 of 2018 “Common Council of the City of Kingston Establishing a Public Hearing Regarding the Possible Merger of the Historic Landmarks Preservation Commission and the Heritage Area Commission” (with accompanying legislation from 5/16/18 to be sent out to Involved Agencies)   was referred back to the Laws and Rules Committee for proper vetting with a  7 / 2 vote.

The good news is that I think Kingston is venturing into a new kind of conversation to better understand Historic Preservation in Kingston with a secondary goal to identify best practices so to make the review process for development more efficient.

Thanks to council members for a thoughtful and robust debate.

It’s also a moment for the executive branch to contemplate better boundaries for its corporation counsel.  I hope that the Kingston Common Council will also consider advocating for a budget line to provide its own council on retainer for second opinions. With a new budget cycle coming up, it’s the perfect time to be putting that forward. I think the public might readily support that this year given this flub. The council should have staff, too. What happened to the council clerk position that began last summer and ended in the fall?

A refreshed value may be placed on the Historic Landmarks Preservation Commission (HLPC), with the council allocating a council liaison and/or, assigning the HLPC to a council committee (perhaps Laws and Rules) for an ongoing dialogue to allow relationships to be built and for council members to have the opportunity to get to know Historic Preservation items and issues in real time, as well as to come to a new appreciation of the work that our commission is doing on Kingston’s behalf. That seems entirely possible to me now.

Below is video from the recent council caucus and meeting with excerpts. Thanks to my partner Clark Richters of the Kingston News for his great work in recording video for this, and all of the meetings that we cover. I couldn’t do it without him.