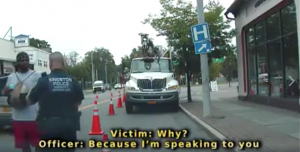 Tomorrow, the Kingston Police Commission will assemble for their monthly meeting to be held at 4:00 pm at Kingston City Hall at 420 Broadway in Kingston, council chambers (top floor). We are told that there will be a sign-up for citizens to speak at the beginning of the meeting, so please plan to arrive at 3:45 to do so and to secure a seat.

As part of the agenda, the Police Commission will be reviewing a complaint filed by City of Kingston resident Fabian Marshall for discussion of an incident that occurred in 2015.

According to the Daily Freeman VIEW, “Fabian Marshall, 27, was found guilty Friday of obstructing governmental administration, a misdemeanor, following a jury trial before City Judge Lawrence Ball. The trial began last Wednesday. The case against Marshall dates to September 2015, when members of the Kingston Police Department were responding to a report of an assault on Broadway, the District Attorney’s Office said in a press release. The release said officers tried to interview Marshall, who was in the same area of the reported assault and matched the description of the assailant, but that he refused to comply, became uncooperative and fought with police.”

The event was captured on a police cam and cellphone which was fortunately released for the public to review. (GRAPHIC)

“…officers tried to interview Marshall, who was in the same area of the reported assault and matched the description of the assailant, but that he refused to comply, became uncooperative and fought with police.”

Being innocent of the alleged crime, Marshall seems uncertain as to why he was being approached by the police officer who acted in an aggressive manner without an explanation at the onset.

Marshall doesn’t appear to pose any danger to the officer carrying a gun and a taser.  In the video, it is alleged that he is tasered 21 times. One time, in this case, was too many.

1 thought on “Fabian Marshall and the Kingston Police Commission.”