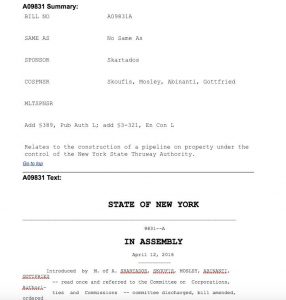 Last evening, the Kingston Public Safety Committee passed a resolution to support Bill A9831a sponsored by Assemblyman Skartados, “an act to prevent the construction of pipelines to transport hazardous substances or petroleum on property under the jurisdiction of the New York Thruway Authority.”

Kate Hudson of Riverkeeper gave a presentation of the proposed Pilgrim Pipeline project as well as an explanation of the bill and the timeliness of its passing.

The committee’s swift action was in part to act in time to send Kingston’s support to the NYS Legislature before their 2016 session ends in June. The resolution will come up for a full council vote next week.

In a memorandum from his office, the justification for the bill states that:

“An oil or refined petroleum pipeline constructed to longitudinally occupy the New York State Thruway would present a significant danger to the state’s natural lands, waters, population, economy, and tourism. A pipeline incident along the Thruway resulting in the leakage of oil or refined petroleum would have a significant and costly impact on adjacent residential communities, endangered habitats, open spaces, forests, farmlands, streams, aquifers, wetlands, scenic vistas, and water sources, including the Delaware and Catskill Aqueducts that supply water to New York City.  An incident would pose a threat to drinking water and thereby impact businesses, local economies, and the health and quality of life of the people in the affected area.  A pipeline incident would harm the endangered and threatened species that live along the Thruway, which include the red shouldered hawk, wood turtle, barred owl, bobcat, and Indiana bat. “

Kingston Public Safety Committee reads resolution text and votes
unanimously to pass it through to council vote that will occur next week.
Video Credit:  Clark Richters of Kingston News.

“Pipelines can cause more damage than trains transporting crude oil. A rail car’s capacity limits the amount of petroleum it can transport, and incidents involving trains are discovered quickly. Pipelines, on the other hand, can leak for an indefinite period of time, and pipeline accidents are often discovered only after their effects have been felt.

Leaks go undetected. Even sophisticated leak detection systems, such as those that might be used in an underground pipeline, cannot guarantee the prevention of a serious incident. According to the Leak Detection Study performed by Kiefner & Associates, published on December 12, 2012, advanced pressure-sensitive systems (from Computational Pipeline Monitoring) detected just 17 of 87 incidents. The consequences of an undetected leak are dire, as quart of oil can contaminate up to a quarter million gallons of drinking water.

Oil pipelines have a history of accidents.  Data from the U.S. Department of Transportation, Pipeline and Hazardous Materials Safety Administration (PHMSA) indicate that more than 2,000 significant accidents involving crude oil and refined petroleum pipelines have occurred between 1995 and 2015, averaging 100 per year and resulting in about $3 billion in property damage.  Over time even a well-constructed pipeline becomes vulnerable to an incident caused by accidental impact, deterioration and corrosion, vandalism, terrorism, and natural disasters such as earthquakes. A poorly constructed pipeline is especially vulnerable to leakage from normal system stress and operation.”

“Pipelines are not currently inspected to a degree at which the safety of New Yorkers can be guaranteed. Currently, 135 federal inspectors oversee 2.6 million miles of pipeline. Each inspector is thus responsible for supervising almost enough pipe to circle the Earth. While PHMSA officials may be aided by state inspectors, there has been no guarantee that this will occur in New York State. Furthermore, an analysis of inspection records obtained by the nonprofit Public Employees for Environmental Responsibility (PEER) indicates that only a fifth of the nation’s 2.6 million miles of pipeline have been inspected by the PHMSA or its state partners since 2006.

Local fire departments are not equipped to handle pipeline-related incidents. Preparation for an adequate response to such occurrences would necessitate a significant amount of funding and training.  Without proper training and equipment, our local firefighters would be put at great risk when called to duty.

A pipeline along the Thruway would be aesthetically disruptive to the natural scenic views we have enjoyed for years and have relied upon for tourism. A pipeline would require numerous maintenance access roads. Moreover, large and noticeable shut-off valves would be frequently placed above ground along the route, with a higher concentration at environmentally sensitive locations such as wetlands and waterways. A typical pipeline shutoff valve associated with a 36-inch diameter pipeline requires stands over five meters tall and weighs approximately eight metric tons.

Furthermore, it is entirely conceivable that a project along the Thruway might utilize two pipelines: one transporting crude oil south to refineries, and another transporting refined products north. Such a plan would significantly increase the risks and impacts of a single line.

In the 2016 State of the State address, Governor Cuomo declared that by 2030, fifty percent of the state’s energy must come from renewable sources, and that protecting the environment should always be one of our top priorities. To fulfill the governor’s plan, we must refrain from investing in hazardous sources of energy like petroleum and crude oil. Disallowing the construction of dangerous pipelines is essential to this effort.”