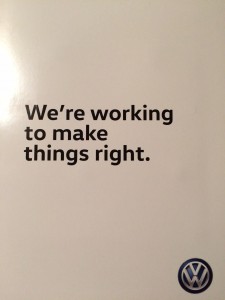 In the meantime, and no one knows how long that will be in America, VW is offering car owners a “Goodwill package” that includes a $500 cash card to spend in any way that they’d like as well as an additional $500 to spend at Volkswagen.  Owners are encouraged to fill out a form online for it to be shipped to your door.

When ours arrived, we were directed to go to our dealership to have the cards activated. So today I made a visit to the one in Kingston where we leased this car.

It was a pleasure to take the opportunity to once again relay how disappointed I was in VW, and to tell them that I wouldn’t be purchasing another one of their vehicles in the future on principal.

“Hey, listen,” said one of their employees. “they’ve apologized. Just take the money.”  I pointed outside, to the 50 degree weather and downpour on December 17th and said “You don’t own me an apology. You owe our environment an apology.”  Another employee boasted that sales have been steady regardless of the setback.  I couldn’t help but wonder if  that’s what $1,000 in gift cards can do – and to me that’s nuts. Are we really that easily bought? Marketing is a wonder! Shower us with cash so that we would continue to hold onto our nostalgic impressions (it’s that 1970 VW bus that’s a killer for me. That and the super beetle).

It occurs to me that there is an enormous disconnect here. We’re expected to continue to drive a polluting car while they find a solution – and, in the meantime, to make us feel better as a consumer, we’re given a $500 cash card to spend during the holidays?

So what to do.  I believe that at any given moment, we can do better.  In this case, although $500 is a lot of money – what I feel is only right is to donate it to a group/groups who are picking up the pieces for what is an unacceptable and tragically greedy decision (VW is going to pay, too. In more ways than one in my opinion).  There are a handful of noble people who have dedicated their lives to fighting immense battles such as climate change, water and air protection, environmental justice and a whole host of other daunting issues and tasks. Because we rely on them for the work that they do, they are the ones who should be given these resources and more.

…and so, we challenge those who, like us (and if you can), who are driving around polluting more than we ever intended to in this case and who have received a gift card –  to give the $500 amount to a local environmental group who you appreciate and cherish. Now more than ever they need our support. Furthermore, it’s the ethical thing to do.

Tonight, we are making a $250 donation to both Riverkeeper and the Woodstock Land Conservancy.