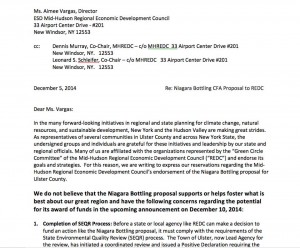 On August 12th, prior to the public being aware of the proposed project, the Mid-Hudson Regional Economic Development Council selected the Niagara Bottling Company endorsed the project as one of their 25 regional priorities for the 2015 funding cycle.  Niagara submitted a CFA (Consolidated Funding Application) – public money  – to help offset the cost of their facility build.

“In response to the proposed Niagara Bottling plant in the Town of Ulster, a growing number of individuals, communities, and organizations in Ulster County and New York State have swiftly come together to form a coalition. Together, the group is dedicated in promoting drinking water as a common good and protecting that right for generations to come.

Niagara wants to build a bottling facility that will process at least 1 million gallons per day (GPD) of water from Kingston’s water supply at Cooper Lake, using over 25% of its capacity, and plans to truck in much more than that from springs in surrounding communities.

In our efforts to build a transparent, participatory process based on the facts about this project, we have learned that the proposal is being promoted without adequate analysis of its potential economic and environmental impacts.

The letter outlines the specific concerns related to the REDC’s selection process, including: